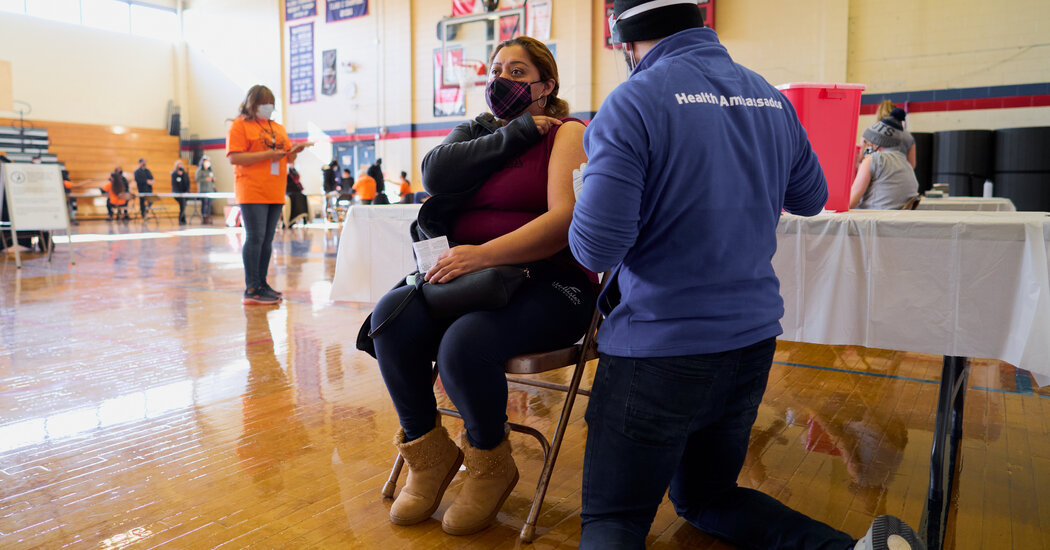 Nearly nine in 10 Americans who received the first dose of a two-dose Covid-19 vaccine went on to complete the regimen, and most people who received two doses got them within the recommended time frames, federal health officials reported on Monday.

The analyses, by investigators with the Centers for Disease Control and Prevention, included data on tens of millions of Americans who received the Moderna or Pfizer-BioNTech vaccines between mid-December and mid-February.

The percentage of people completing the regimens varied markedly by jurisdiction and between demographic groups, however. Federal health officials urged local vaccinators to take steps to ensure that everyone comes back, including scheduling a return appointment when giving the first shot, sending reminders, and rescheduling missed or canceled appointments.

While the data were “reassuring” over all, C.D.C. researchers said, the first groups receiving the vaccine in the United States — health care workers and long-term care facility residents — had easy access to the second dose, since they were likely to have been vaccinated at their workplace or place of residence.

As vaccines are offered to broader groups of people, the scientists warned, the percentage getting fully vaccinated may drop.

People are not considered fully vaccinated against the coronavirus until two weeks after they receive the second shot of the two-dose regimen (or two weeks after receiving the single-dose vaccine made by Johnson & Johnson).

In one analysis, they reviewed the records of 12.4 million people who had received the first dose of a two-dose vaccine regimen and had enough time to get the second dose. Some 88 percent had completed the series, while 8.6 percent were still within the allowable interval — 42 days — to receive the second dose. But 3.4 percent had missed that window. (The recommended interval between doses is 21 days for the Pfizer-BioNTech vaccine and 28 days for Moderna).

Americans most likely to have missed the second dose varied by locality. Among vaccine recipients for whom information on race and ethnicity were known, the lowest completion rates were among Native American or Alaska Native individuals.

A second analysis of 14.2 million people who completed the full regimen found that 95.6 percent received the second dose within the recommended period, though again the figures varied by community.

The authors of the study urged providers and public health workers to encourage Americans to come back for second doses and to emphasize the importance of full vaccination. C.D.C. officials also asked that vaccinators work to understand what keeps people from completing the series, and whether access or lack of confidence in the vaccines are playing a role.

Phil Shell loves the Bay Area and its real estate market. He’s been building his career here as an agent over the past eight years, but even he hasn’t … END_OF_DOCUMENT_TOKEN_TO_BE_REPLACED

DS4 Cross DS The Plug-in hybrid seems the perfect answer to the electric car dilemma; battery power for all your local needs and a traditional motor … END_OF_DOCUMENT_TOKEN_TO_BE_REPLACED