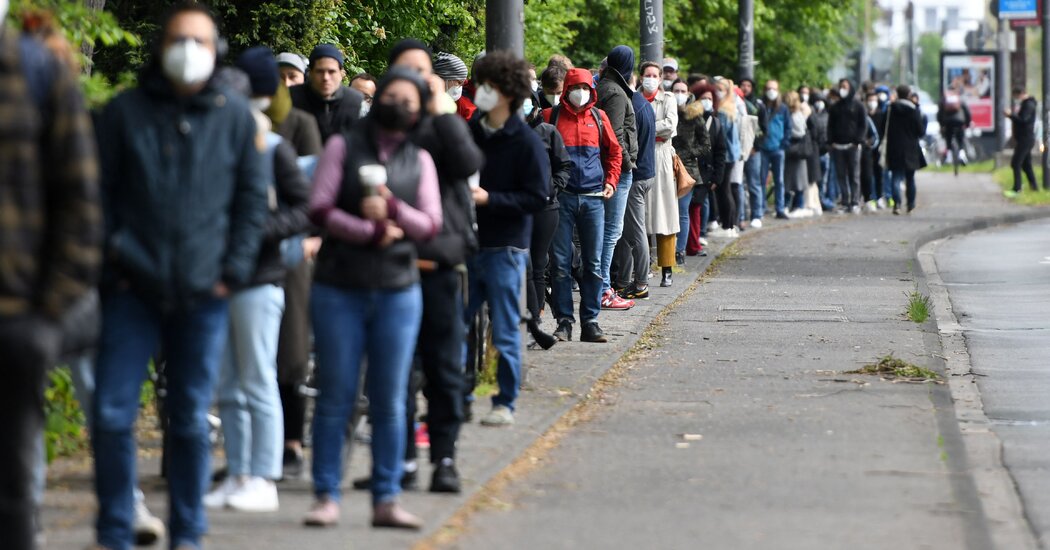 Vaccinations are picking up pace in the European Union, a stunning turnaround after the bloc’s immunization drive stalled for months.

On average over the last week, nearly three million doses of the Covid-19 vaccine were being administered each day in the European Union, a group of 27 nations, according to Our World in Data, a University of Oxford database. Adjusted for population, the rate is roughly equivalent to the number of shots given each day in the United States, where demand has been falling.

The E.U. vaccination campaign, marred by disruptions in supplies of the AstraZeneca and Johnson & Johnson Covid-19 vaccines, pivoted last month to rely heavily on the Pfizer-BioNTech vaccine.

Last month, Ursula von der Leyen, the European Commission president, said that Pfizer had agreed to an early shipment of doses that she said should likely allow the bloc to reach its goal of inoculating 70 percent of adults by the end of the summer. The European Union is also on the verge of announcing a deal with Pfizer and its German partner BioNTech for 2022 and 2023 that will lock in 1.8 billion doses for boosters, variants and children’s vaccines.

customer than an investor.

“I think it is overdue that the E.U. has stepped up their vaccination campaign,” said Beate Kampmann, director of the Vaccine Center at the London School of Hygiene and Tropical Medicine.

“I think in the context of the rate of deaths we’ve seen and new cases we’ve seen in the E.U., it is absolutely vital that we get the vaccine to people there very, very quickly,” she added.

The E.U.’s increase underscores the global disparities in vaccination efforts.

waiving intellectual property protections for Covid vaccines, which would need approval from the World Trade Organization. And even then, experts warn that pharmaceutical companies around the world would need technological help to make the vaccines and time to ramp up production.

European leaders like Ms. von der Leyen and President Emmanuel Macron have made it clear they think President Biden should take a different approach, and instead lift export restrictions on vaccines, which the United States has employed to keep most doses for use domestically. “We call upon all vaccine-producing countries to allow export and to avoid measures that disrupt the supply chains,” Ms. von der Leyen said in a speech last week.

But the matter is not so absolute, said Dr. Thomas Tsai, a professor who researches health policy at Harvard University. “What’s really needed is an all-of-the-above approach,” he said. Waiving patents is a big long-term step, he said, but lifting export bans would provide help sooner.

“There is a need to move toward a more comprehensive strategy” in vaccinating the world, Dr. Tsai said. “We need that same sort of Warp Speed type of commitment. It’s an investment.”

AUSTIN, Texas--(BUSINESS WIRE)--As the first multifamily management company to be recognized in the Public Relations and Marketing Excellence Awards, … END_OF_DOCUMENT_TOKEN_TO_BE_REPLACED

There have been whispers of cooling housing and rental prices in the San Francisco Bay Area, but that hasn't yet translated into practical, noticeable … END_OF_DOCUMENT_TOKEN_TO_BE_REPLACED

Cars pass in Independence Square at twilight in Kyiv, Ukraine, Monday, Oct. 31, 2022. Rolling ... [+] blackouts are increasing across Ukraine as the … END_OF_DOCUMENT_TOKEN_TO_BE_REPLACED