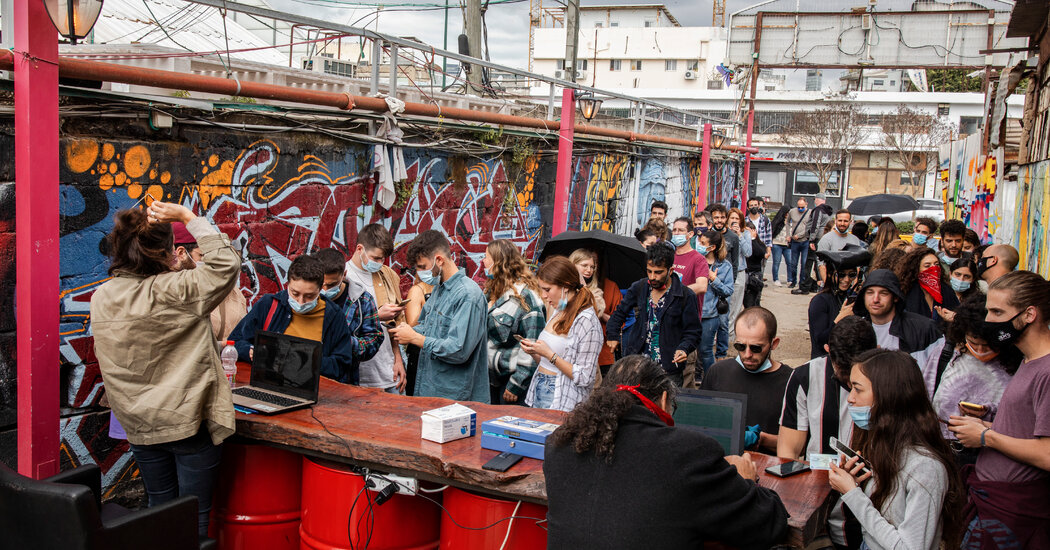 LONDON — For Aruba, a Caribbean idyll that has languished since the pandemic drove away its tourists, the concept of a “vaccine passport” is not just intriguing. It is a “lifeline,” said the prime minister, Evelyn Wever-Croes.

Aruba is already experimenting with a digital certificate that allows visitors from the United States who tested negative for the coronavirus to breeze through the airport and hit the beach without delay. Soon, it may be able to fast-track those who arrive with digital confirmation that they have been vaccinated.

“People don’t want to stand in line, especially with social distancing,” Ms. Wever-Croes said in an interview this week. “We need to be ready in order to make it hassle-free and seamless for the travelers.”

Vaccine passports are increasingly viewed as the key to unlocking the world after a year of pandemic-induced lockdowns — a few bytes of personal health data, encoded on a chip, that could put an end to suffocating restrictions and restore the freewheeling travel that is a hallmark of the age of globalization. From Britain to Israel, these passports are taking shape or already in use.

But they are also stirring complicated political and ethical debates about discrimination, inequality, privacy and fraud. And at a practical level, making them work seamlessly around the globe will be a formidable technical challenge.

The debate may play out differently in tourism- or trade-dependent outposts like Aruba and Singapore, which view passports primarily as a tool to reopen borders, than it will in vast economies like the United States or China, which have starkly divergent views on civil liberties and privacy.

The Biden administration said this week that it would not push for a mandatory vaccination credential or a federal vaccine database, attesting to the sensitive political and legal issues involved. In the European Union and Britain, which have taken tentative steps toward vaccine passports, leaders are running into thorny questions over their legality and technical feasibility.

And in Japan, which has lagged the United States and Britain in vaccinating its population, the debate has scarcely begun. There are grave misgivings there about whether passports would discriminate against people who cannot get a shot for medical reasons or choose not to be vaccinated.

Japan, like other Asian countries, has curbed the virus mainly through strict border controls.

“Whether or not to get vaccinated is up to the individual,” said Japan’s health minister, Norihisa Tamura. “The government should respond so that people won’t be disadvantaged by their decision.”

Still, almost everywhere, the pressure to restart international travel is forcing the debate. With tens of millions of people vaccinated, and governments desperate to reopen their economies, businesses and individuals are pushing to regain more freedom of movement. Verifying whether someone is inoculated is the simplest way to do that.

“There’s a very important distinction between international travel and domestic uses,” said Paul Meyer, the founder of the Commons Project, a nonprofit trust that is developing CommonPass, a scannable code that contains Covid testing and vaccination data for travelers. Aruba was the first government to sign up for it.

“There doesn’t seem to be any pushback on showing certification if I want to travel to Greece or Cyprus,” he said, pointing out that schools require students to be vaccinated against measles and many countries demand proof of yellow fever vaccinations. “From a public health perspective, it’s not fair to say, ‘You have no right to check whether I’m going to infect you.’”

CommonPass is one of multiple efforts by technology companies and others to develop reliable, efficient systems to verify the medical status of passengers — a challenge that will deepen as more people resume traveling.

At Heathrow Airport in London, which is operating at a fraction of its normal capacity, arriving passengers have had to line up for hours while immigration officials check whether they have proof of a negative test result and have purchased a mandatory kit to test themselves twice more after they enter the country.

Saudi Arabia announced this week that pilgrims visiting the mosques in Mecca and Medina during the Muslim holy month of Ramadan would have to show proof on a mobile app of being “immunized,” which officials defined as having been fully vaccinated, having gotten a single dose of a vaccine at least 14 days before arrival, or having recovered from Covid.

In neighboring United Arab Emirates, residents can show their vaccination status on a certificate through a government-developed app. So far, the certificate is not yet widely required for anything beyond entering the capital, Abu Dhabi, from abroad.

Few countries have gone farther in experimenting with vaccine passports than Israel. It is issuing a “Green Pass” that allows people who are fully vaccinated to go to bars, restaurants, concerts and sporting events. Israel has vaccinated more than half its population and the vast majority of its older people, which makes such a system useful but raises a different set of questions.

With people under 16 not yet eligible for the vaccine, the system could create a generational divide, depriving young people of access to many of the pleasures of their elders. So far, enforcement of the Green Pass has been patchy, and in any event, Israel has kept its borders closed.

So has China, which remains one of the most sealed-off countries in the world. In early March, the Chinese government announced it would begin issuing an “international travel health certificate,” which would record a user’s vaccination status, as well as the results of antibody tests. But it did not say whether the certificate would spare the user from China’s draconian quarantines.

Nor is it clear how eager other countries would be to recognize China’s certificate, given that Chinese companies have been slow in disclosing data from clinical trials of their homegrown vaccines.

Singapore has also maintained strict quarantines, even as it searches for way to restart foreign travel. Last week, it said it would begin rolling out a digital health passport, allowing passengers to use a mobile app to share their coronavirus test results before flying into the island nation.

Free movement across borders is the goal of the European Union’s “Digital Green Certificate.” The European Commission last month set out a plan for verifying vaccination status, which would allow a person to travel freely within the bloc. It left it up to its 27 member states to decide how to collect the health data.

That could avoid the pitfalls of the European Union’s vaccine rollout, which was heavily managed by Brussels and has been far slower than that in the United States or Britain. Yet analysts noted that in data collection, there is a trade-off between decentralized and centralized systems: the former tends to be better at protecting privacy but less efficient; the latter, more intrusive but potentially more effective.

“Given the very unequal access to vaccines we are witnessing in continental Europe, there is also an issue of equal opportunity and potential discrimination,” said Andrea Renda, a senior research fellow at the Center for European Policy Studies in Brussels.

For some countries, the legal and ethical implications have been a major stumbling block to domestic use of a passport. As Prime Minister Justin Trudeau of Canada put it last month, “There are questions of fairness and justice.”

And yet in Britain, which has a deeply rooted aversion to national ID cards, the government is moving gingerly in that direction. Prime Minister Boris Johnson last week outlined broad guidelines for a Covid certificate, which would record vaccination status, test results, and whether the holder had recovered from Covid, which confers a degree of natural immunity for an unknown duration.

Mr. Johnson insisted that shops, pubs and restaurants would not be required to demand the certificate, though they could opt to do so on their own. That did not stop dozens of lawmakers, from his Conservative Party and the opposition Labour Party, from opposing the plan on grounds that were legal, ethical and plainly commercial — that it could keep people out of the country’s beloved pubs.

Government officials now suggest that the plan is targeted less at pubs and restaurants and more at higher-risk settings, like nightclubs and sporting events.

“Would we rather have a system where no one can go to a sports ground or theater?” said Jonathan Sumption, a former justice on Britain’s Supreme Court, who has been an outspoken critic of the government’s strict lockdowns. “It’s better to have a vaccine passport than a blanket rule which excludes these pleasures from everybody.”

AUSTIN, Texas--(BUSINESS WIRE)--As the first multifamily management company to be recognized in the Public Relations and Marketing Excellence Awards, … END_OF_DOCUMENT_TOKEN_TO_BE_REPLACED

There have been whispers of cooling housing and rental prices in the San Francisco Bay Area, but that hasn't yet translated into practical, noticeable … END_OF_DOCUMENT_TOKEN_TO_BE_REPLACED

Cars pass in Independence Square at twilight in Kyiv, Ukraine, Monday, Oct. 31, 2022. Rolling ... [+] blackouts are increasing across Ukraine as the … END_OF_DOCUMENT_TOKEN_TO_BE_REPLACED