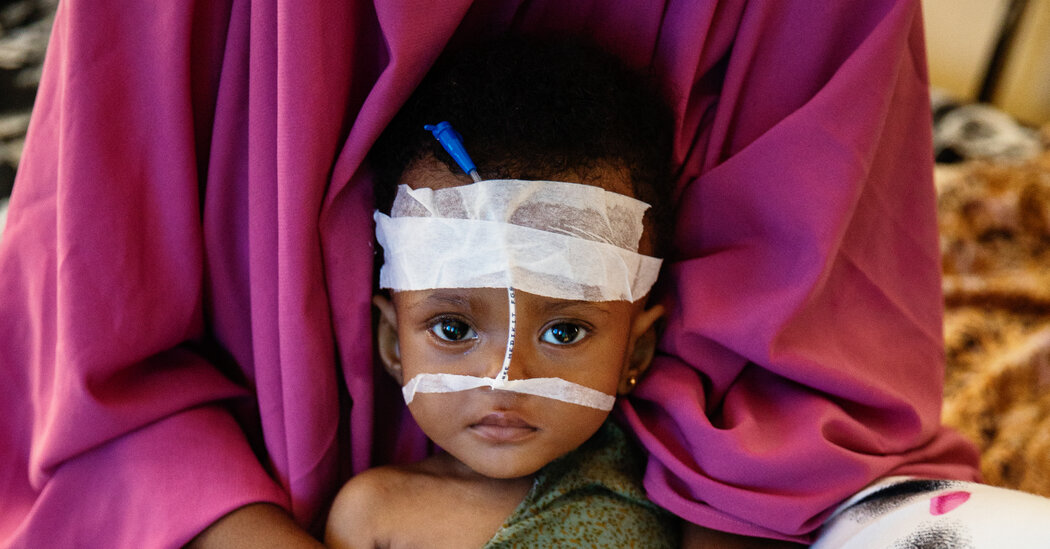 DOOLOW, Somalia — When her crops failed and her parched goats died, Hirsiyo Mohamed left her home in southwestern Somalia, carrying and coaxing three of her eight children on the long walk across a bare and dusty landscape in temperatures as high as 100 degrees.

Along the way, her 3-and-a-half-year-old son, Adan, tugged at her robe, begging for food and water. But there was none to give, she said. “We buried him, and kept walking.”

They reached an aid camp in the town of Doolow after four days, but her malnourished 8-year-old daughter, Habiba, soon contracted whooping cough and died, she said. Sitting in her makeshift tent last month, holding her 2-and-a-half-year-old daughter, Maryam, in her lap, she said, “This drought has finished us.”

imperiling lives across the Horn of Africa, with up to 20 million people in Kenya, Ethiopia and Somalia facing the risk of starvation by the end of this year, according to the World Food Program.

appealed to President Vladimir V. Putin of Russia to lift the blockade on exports of Ukrainian grain and fertilizer — even as American diplomats warned of Russian efforts to sell stolen Ukrainian wheat to African nations.

The most devastating crisis is unfolding in Somalia, where about seven million of the country’s estimated 16 million people face acute food shortages. Since January, at least 448 children have died from severe acute malnutrition, according to a database managed by UNICEF.

only about 18 percent of the $1.46 billion needed for Somalia, according to the United Nations’ financial tracking service. “This will put the world in a moral and ethical dilemma,” said El-Khidir Daloum, the Somalia country director for the World Food Program, a U.N. agency.

projected to increase by up to 16 percent because of the war in Ukraine and the pandemic, which made ingredients, packaging and supply chains more costly, according to UNICEF.

displaced by the drought this year. As many as three million Somalis have also been displaced by tribal and political conflicts and the ever-growing threat from the terrorist group Al Shabab.

spend 60 to 80 percent of their income on food. The loss of wheat from Ukraine, supply-chain delays and soaring inflation have led to sharp rises in the prices of cooking oil and staples like rice and sorghum.

Short on weapons. Ukraine has been making desperate pleas for the West to speed up the delivery of heavy weapons as its troops find themselves badly outgunned. The Russian forces, meanwhile, appear to be running low on precision missiles. This shortage had led the Russians to resort to other inefficient weapons systems that are less precise but can still cause major damage, according to Britain’s Defense Ministry.

At a market in the border town of Doolow, more than two dozen tables were abandoned because vendors could no longer afford to stock produce from local farms. The remaining retailers sold paltry supplies of cherry tomatoes, dried lemons and unripe bananas to the few customers trickling in.

perished since mid-2021, according to monitoring agencies.

The drought is also straining the social support systems that Somalis depend on during crises.

As thousands of hungry and homeless people flooded the capital, the women at the Hiil-Haween Cooperative sought ways to support them. But faced with their own soaring bills, many of the women said they had little to share. They collected clothes and food for about 70 displaced people.

“We had to reach deep into our community to find anything,” said Hadiya Hassan, who leads the cooperative.

likely fail, pushing the drought into 2023. The predictions are worrying analysts, who say the deteriorating conditions and the delayed scale-up in funding could mirror the severe 2011 drought that killed about 260,000 Somalis.

For now, the merciless drought is forcing some families to make hard choices.

Back at the Benadir hospital in Mogadishu, Amina Abdullahi gazed at her severely malnourished 3-month-old daughter, Fatuma Yusuf. Clenching her fists and gasping for air, the baby let out a feeble cry, drawing smiles from the doctors who were happy to hear her make any noise at all.

“She was as still as the dead when we brought her here,” Ms. Abdullahi said. But even though the baby had gained more than a pound in the hospital, she was still less than five pounds in all — not even half what she should be. Doctors said it would be a while before she was discharged.

This pained Ms. Abdullahi. She had left six other children behind in Beledweyne, about 200 miles away, on a small, desiccated farm with her goats dying.

“The suffering back home is indescribable,” she said. “I want to go back to my children.”

The poshest place in California's Coachella Valley is The Madison Club. This exclusive gated community in La Quinta is where A-listers and tycoons … END_OF_DOCUMENT_TOKEN_TO_BE_REPLACED

KOROPY, Ukraine — Four men tugged at long strips of fabric to lift a coffin out of the gaping hole in the backyard of a small house. They flung the … END_OF_DOCUMENT_TOKEN_TO_BE_REPLACED