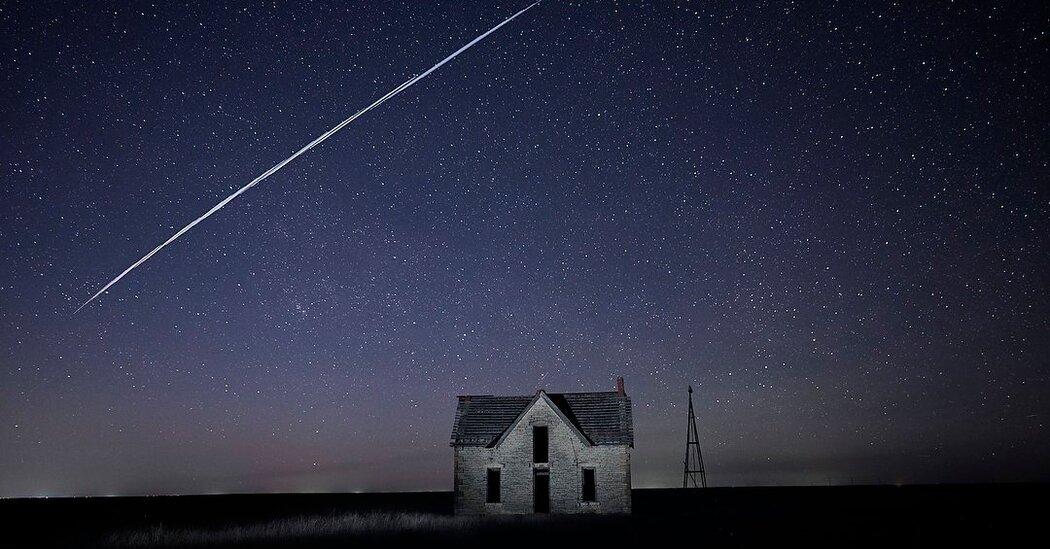 Yet the two may come to be linked. Our planet’s atmosphere naturally pulls orbiting debris downward and incinerates it in the thicker lower atmosphere, but increasing carbon dioxide levels are lowering the density of the upper atmosphere, which may diminish this effect. A study presented last month at the European Conference on Space Debris says that the problem has been underestimated, and that the amount of space junk in orbit could, in a worst-case scenario, increase 50 times by 2100.

“The numbers took us by surprise,” said Hugh Lewis, a space debris expert from the University of Southampton in England and a co-author on the paper, which will be submitted for peer review in the coming months. “There is genuine cause for alarm.”

Our atmosphere is a useful ally in clearing up space junk. Collisions with its molecules cause drag, pulling objects back into the atmosphere. Below 300 miles above the surface, most objects will naturally decay into the thicker lower atmosphere and burn up in less than 10 years.

rerelease infrared radiation after absorbing it from the sun, which is then trapped by the thick atmosphere as heat. But above 60 miles where the atmosphere is thinner, the opposite is true. “There’s nothing to recapture that energy,” said Matthew Brown, also from the University of Southampton and the paper’s lead author. “So it gets lost into space.”

For space junk, the implications are stark. More than 2,500 objects larger than four inches in size currently orbit at or below an altitude of 250 miles. In the worst-case scenario, increased orbital lifetimes of up to 40 years would mean fewer items are dragged into the lower atmosphere. Objects at this altitude would proliferate by 50 times to about 125,000.

Even in a best-case scenario, where carbon dioxide levels stabilize or even reverse, the amount of space junk would still be expected to double. Mr. Brown thinks a more probable outcome is somewhere in between, perhaps a 10 or 20 times increase.

The findings may also pose challenges for regulators and satellite operators, especially SpaceX, Amazon and other companies seeking to build megaconstellations of thousands of satellites to beam internet service down to the ground from low Earth orbit.

Just last month, for example, the U.S. Federal Communications Commission approved a request from SpaceX to decrease the orbits of nearly 3,000 satellites in its Starlink constellation, reasoning that atmospheric drag would naturally sweep up dead satellites and debris in a reasonable amount of time.

Debris Assessment Software to predict lifetimes of satellites in low Earth orbit. “We do not know at this time if there are any plans to change that program to address the changes in atmospheric composition predicted in the paper,” he said. “The F.C.C. periodically reviews its rules and regulations and updates them consistent with developments in the marketplace and in scientific knowledge.”

SpaceX did not respond to a request for comment.

Dr. Lewis said that he suspected that some of the modeling, however, relies on outdated data, and that more needed to be done to actively remove satellites and debris from orbit rather than relying on the passive atmospheric effect. “Operators have to make this aspect of the mission a priority,” he said.

Even a moderate increase in lifetimes for large constellations could pose significant problems. “If SpaceX’s spacecraft re-enter passively in 10 or 15 years, would you argue that’s good enough?” Dr. Lewis said. “Given the fact that it’s a large constellation, lots of people would say probably not.”

The Bay Area is the last place in the U.S. with rental prices below pre-pandemic levels, according to a new report from Apartment List. That seems … END_OF_DOCUMENT_TOKEN_TO_BE_REPLACED

BUCHA, Ukraine — A breeze rustles through the cherry blossoms in bloom on almost every block in this small city, the white petals fluttering onto … END_OF_DOCUMENT_TOKEN_TO_BE_REPLACED