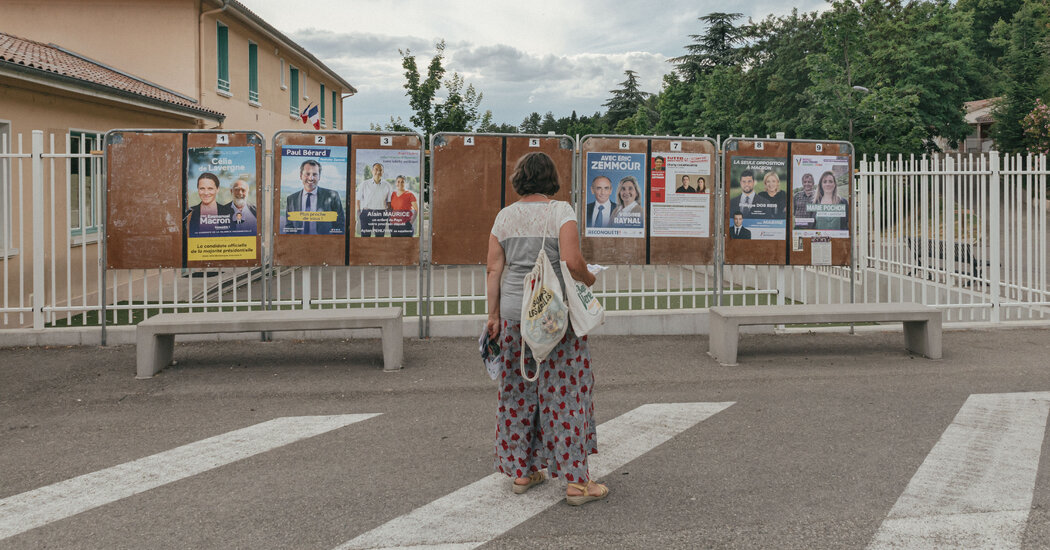 PARIS — Weeks after re-electing President Emmanuel Macron, voters in France return to the polls on Sunday to choose their parliamentary representatives, elections that will determine whether Mr. Macron’s bills sail or stumble through the legislature during his second term.

All 577 seats are up for grabs in the National Assembly, France’s lower and more powerful house of Parliament, which Mr. Macron’s party and its allies currently control. Most polls predict that will remain the case — to a degree.

France’s modern presidential and parliamentary elections are held only months apart, on the same five-year cycle. Over the past two decades, voters have always given their newly elected president strong parliamentary backing, and polls and experts suggest that would be a likely outcome for Mr. Macron this time, too.

surging inflation than by the campaign, and pollsters say they expect record-low turnout.

Here is a primer on the elections, which will be held in two rounds, on Sunday and on June 19.

most powerful political office, with broad abilities to govern by decree. But they need Parliament, and especially the National Assembly, to accomplish most of their bigger domestic policy goals, push through spending bills or change the Constitution.

With the reelection of Emmanuel Macron, French voters favored his promise of stability  over the temptation of an extremist lurch.

Some of Mr. Macron’s prominent campaign promises, like his vow to raise the legal age of retirement, require legislation. His new government also wants to tackle the effects of inflation, requiring lawmakers to vote on measures like food subsidies.

a wave of political newcomers as candidates.

The latest polls suggest that Ensemble and NUPES are neck-and-neck, with about 25 to 28 percent each. The National Rally is predicted to receive around 20 to 21 percent of the vote, with Les Républicains roughly 10 to 11 percent. Smaller groups, including the party of Éric Zemmour, a far-right pundit who ran for president, are polling in the single digits.

Élisabeth Borne, the prime minister. Their races will be closely watched, as a loss by one or several of them would be seen as a rebuke of Mr. Macron, who has warned that those who are not elected will leave his cabinet.

AUSTIN, Texas--(BUSINESS WIRE)--As the first multifamily management company to be recognized in the Public Relations and Marketing Excellence Awards, … END_OF_DOCUMENT_TOKEN_TO_BE_REPLACED

There have been whispers of cooling housing and rental prices in the San Francisco Bay Area, but that hasn't yet translated into practical, noticeable … END_OF_DOCUMENT_TOKEN_TO_BE_REPLACED

Cars pass in Independence Square at twilight in Kyiv, Ukraine, Monday, Oct. 31, 2022. Rolling ... [+] blackouts are increasing across Ukraine as the … END_OF_DOCUMENT_TOKEN_TO_BE_REPLACED