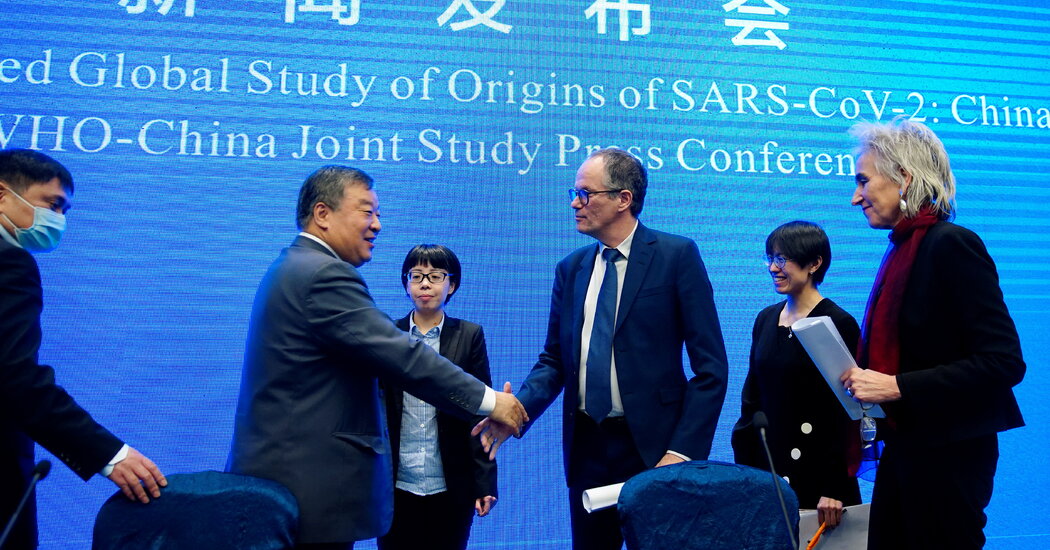 More than a year after the coronavirus pandemic began, the World Health Organization released a report on Tuesday laying out theories on how the virus first spread to humans — but it is already raising more questions than answers, including from the health body’s own leader.

The report, drafted by a 34-member team of Chinese scientists and international experts who led a mission to Wuhan, China, examines a series of politically contentious questions, including whether the virus might have accidentally emerged from a Chinese laboratory.

Some members of the expert team have raised concerns about China’s refusal to share raw data about early Covid-19 cases. In an unusual move, Dr. Tedros Adhanom Ghebreyesus, the W.H.O.’s director-general, acknowledged those concerns while speaking about the report on Tuesday. He said he hoped future studies would include “more timely and comprehensive data sharing.”

prepared remarks released to the news media. “Further data and studies will be needed to reach more robust conclusions.”

The experts had said that officials at the Wuhan Institute of Virology, which houses a state-of-the-art laboratory known for its research on bat coronaviruses, assured them that they were not handling any viruses that appeared to be closely related to the coronavirus that caused the recent pandemic, according to meeting notes included in the report. They also said that staff members had been trained in security protocols.

Huanan Seafood Wholesale Market in Wuhan, where many early cases of Covid-19 emerged. The expert team said that there appeared to be no connection, writing that the lab had not reported any “disruptions or incidents caused by the move” and had not been doing research on coronaviruses.

Some critics have suggested that the team seemed to take the Chinese official position at face value and did not adequately investigate lab officials’ assertions.

Raina MacIntyre, who heads the biosecurity program at the Kirby Institute of the University of New South Wales in Sydney, Australia, said the report seemed to dismiss the idea of a lab leak “without strong evidence.”

“A lab accident is certainly a possibility,” she said.

The role of animal markets is still unclear.

The expert team concluded that the coronavirus probably emerged in bats before spreading to humans through an intermediate animal. But the team said there was not enough evidence to identify the species or to pinpoint where the spillover of the virus from animals first occurred.

Early in the pandemic, Chinese officials floated theories suggesting that the coronavirus outbreak might have started at the Huanan market. More than a year later, the role of animal markets in the story of the pandemic is still unclear, according to the report.

The expert team found that many early cases had no clear connection to Huanan market, which sold sika deer, badgers, bamboo rats, live crocodiles and other animals, according to vendor records cited in the report.

Among those initial confirmed cases, about 28 percent had links to the Huanan market and 23 percent were tied to other markets in Wuhan, while 45 percent had no history of market exposure, according to the report.

“No firm conclusion therefore about the role of the Huanan market in the origin of the outbreak, or how the infection was introduced into the market, can currently be drawn,” the report says.

It says that further studies of farms and wild animals in China are needed, and that more clues about the markets’ role may emerge.

The inquiry’s success will depend on China.

The expert team offers a long list of recommendations for additional research: more testing of wildlife and livestock in China and Southeast Asia, more studies on the earliest cases of Covid-19 and more tracing of pathways from farms to markets in Wuhan.

But it is unclear whether China, which has repeatedly hindered the W.H.O. inquiry, will cooperate. Chinese officials have sought to redirect attention elsewhere, suggesting that the virus could have emerged in the United States or other countries.

Experts say the delays in the inquiry have hurt the ability to prevent other pandemics.

“This delay has obviously compromised the ability of the investigation to reconstruct the origins of Covid-19 and identify ways of reducing the risk of such events happening again in the future,” said Michael Baker, a professor of public health at the University of Otago in New Zealand.

Chief Covelli said Mr. Crimo planned the shooting for several weeks, but that the authorities had not yet established what his motive was. “We have no … END_OF_DOCUMENT_TOKEN_TO_BE_REPLACED

Kevin McKenzie and Martine van Hamel were standing in the dining room of their weekend house in Woodstock, N.Y., trying to figure out when they got … END_OF_DOCUMENT_TOKEN_TO_BE_REPLACED