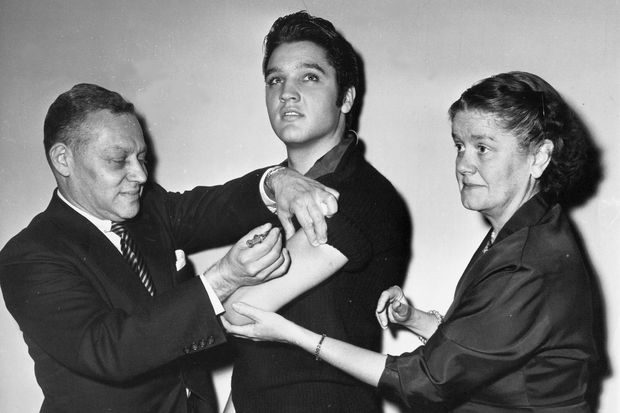 After briefly waiting in line, William Schaffner and his father joined six million people in greater New York who were vaccinated in just over three weeks, a logistical feat made possible by seamless cooperation between local and federal authorities.

Dr. Schaffner, now professor of medicine at Vanderbilt University, says the high-speed vaccination campaign that ended an outbreak of smallpox was in many ways more successful than this year’s delay-ridden immunization campaign against Covid-19.

It wasn’t a one-off either. In 1954, Dr. Schaffner became one of the so-called Polio Pioneers who volunteered for the trial of a new vaccine that was then swiftly rolled out across the U.S., reaching tens of millions of people with the help of influencers such as Elvis Presley and without many of the challenges facing today’s campaign.

Today, New York City authorities have administered just over two million doses of Covid-19 vaccines since the start of the rollout in December, a third of what their predecessors managed in less than a month back in 1947.

So what is different now and what is there to learn from these previous campaigns that, in retrospect, appear to have marked the peak of vaccination prowess in Western nations?

While scarcity of the brand new vaccines is perhaps the greatest bottleneck today, other factors have helped to slow down the rollout. Among them: fading trust in public institutions and science, an underfunded healthcare infrastructure, a less capable government, the rise of vaccine skepticism and even political polarization.

In the past, politicians and public health officials worked across federal and local government to get shots into arms, Dr. Schaffner said, while today’s response to the coronavirus pandemic has suffered from polarization and incoherent messaging, as exemplified in the U.S. by the contradictory statements by President Donald Trump and Anthony Fauci, the White House medical adviser, last year.

In 1947, President Harry Truman came to New York to take the shot and help the campaign, and New York Mayor William O’Dwyer took the shot in public.

“I think the credibility of governments and the population’s trust in them has gone significantly down…and as a consequence the population doesn’t just line up and agree to be vaccinated,” said Moncef Slaoui, the chief scientist behind Operation Warp Speed, the U.S. government-run project to develop vaccines.

Vaccine reluctance has spread even among healthcare professionals. In France, around half of health workers in French care homes refuse to take a Covid-19 vaccine, while in Germany, the BeneVit care home operator found that only 30% of staff wished to be vaccinated.

Instead of speeding up vaccination, contemporary technologies such as digital data processing have sometimes turned into a bottleneck.

In Germany, privacy concerns prevent authorities from easily reaching out to some citizens. In some German states, no one can get a vaccination appointment until they have received the letter inviting them to do so. In states that have online registration, the process includes a two-step authentication that health experts said was challenging even for young applicants.

Dosing regimens, rigidly based on vaccine trials, and prioritization schedules have added complexity to the rollouts.

Past vaccination efforts were generally open to all, and governments drafted pragmatic vaccination policies guided by science. Today’s strict adherence to trial protocols, such as giving the second dose of Pfizer Inc. vaccine three weeks after the first, while prudent, comes at the expense of efficiency.

“Second doses were often delayed in the past,” said Stanley Plotkin, a scientist who developed a number of vaccines, including the shot against rubella, one of the most successful in history. In some instances, such unplanned delays actually boosted recipients’ immune responses.

Most governments are following the recommendations made by regulators to use a two-dose regimen. Similarly, most follow a strict system of prioritizing risk groups today such as the elderly, residents of care homes and frontline medical workers. These are needed because there is a vaccine shortfall and they also reflect the lopsided risks posed by Covid-19, which is much riskier for certain groups than for others.

Rollouts have been particularly slow in the European Union. Despite a shortage of vaccines, millions of doses are languishing in storage there due to logistical bottlenecks and a reluctance by eligible recipients to take a shot that has occasionally caused strong reactions. In Germany, 2.4 million doses were lying in storage in the first week of March, while in France over 1.2 million doses made by AstraZeneca PLC were waiting to be used.

As recently as 2009, the Netherlands garnered praise from the World Health Organization for its rapid campaign of vaccination against swine flu. Back then, the government marshalled the army to distribute the vaccine, said Angela Hume, a retired colonel and medical doctor who was in charge of the effort at the time.

“In six days, we delivered six million vaccines to over 5,000 general practitioners and 1,000 medical institutions,” Dr. Hume said. Army personnel were trained to transport frozen blood in hot climate battlefields such as Afghanistan.

Today, the Dutch vaccination effort is among the slowest in Europe: By March 2, the Netherlands had administered 5.9 doses per 100 people, compared to more than 8 in Romania and 22 in Serbia, two nations with a much lower gross domestic product per capita.

Past vaccination campaigns often relied on the military for support. During Europe’s last major smallpox outbreak in the former Yugoslavia in 1972, authorities managed to vaccinate 18 million of the country’s 20 million inhabitants within three weeks.

The effort stopped the outbreak within days by unleashing the full capacity of the state, including the army, the police and medical charities, according to Zoran Radovanovic, a senior epidemiologist who helped coordinate the effort.

People formed orderly queues across the nation to receive the shot as vaccinators worked three shifts, while mobile teams stopped cars on the road to vaccinate travelers and ventured into the most remote rural areas.

What’s the status of the vaccine rollout in your community? Share your stories with us.

Only one infected person left the country undetected on a flight to Hannover, Germany, where authorities then swiftly vaccinated 70,000 people within days—more than they managed in weeks across the country during the start of the Covid-19 vaccination this year.

“Back then, we didn’t have people questioning advice from medical doctors, but now we have this postmodern belief that medical authority needs to be questioned, that one needs to seek information on the internet instead of lining up to take the vaccine,” Dr. Radovanovic said.

Most countries have opted not to deploy the military in this pandemic. Dr. Radovanovic said this could be because Covid-19 has been less dangerous for children, and its overall lethality is lower than that of smallpox, which kills three out of 10 confirmed cases.

Another factor that helped vaccination efforts in the past was cooperation between geopolitical rivals. The U.S., Europe, the former Soviet Union and China routinely worked hand-in-hand to combat diseases—a feature lacking in today’s pandemic that has exposed deep rivalries between blocs and even between friendly nations, according René F. Najera, an epidemiologist and editor of the History of Vaccines website.

One of the most successful vaccines in history, the oral polio vaccine, underwent trials by U.S. scientist Albert Sabin in the Soviet Union. After Moscow vaccinated 77 million people within months in 1960, the U.S. promptly approved the shot—without any qualms about using a Soviet-developed product.

Today, Western governments and some of the scientific establishment have expressed skepticism about the Russian and the Chinese Covid-19 shots, Mr. Najera said. Likewise, Russian and Chinese authorities have been slow in releasing data surrounding their vaccines, adding to the skepticism.

“It’s just silly to marry political ideology with public health interventions: Had that happened in the 1960s, the U.S. would have lost the oral polio vaccine,” Mr. Najera said.

A Jewish-Australian AccentReading your letter really resonated with me. Not because I am Asian-Australian myself, but because I undeniably have what I … END_OF_DOCUMENT_TOKEN_TO_BE_REPLACED

He's a legend in New Jersey high school wrestling – and a mystery in the stock market.Paul Morina, the principal of Paulsboro, New Jersey, High … END_OF_DOCUMENT_TOKEN_TO_BE_REPLACED