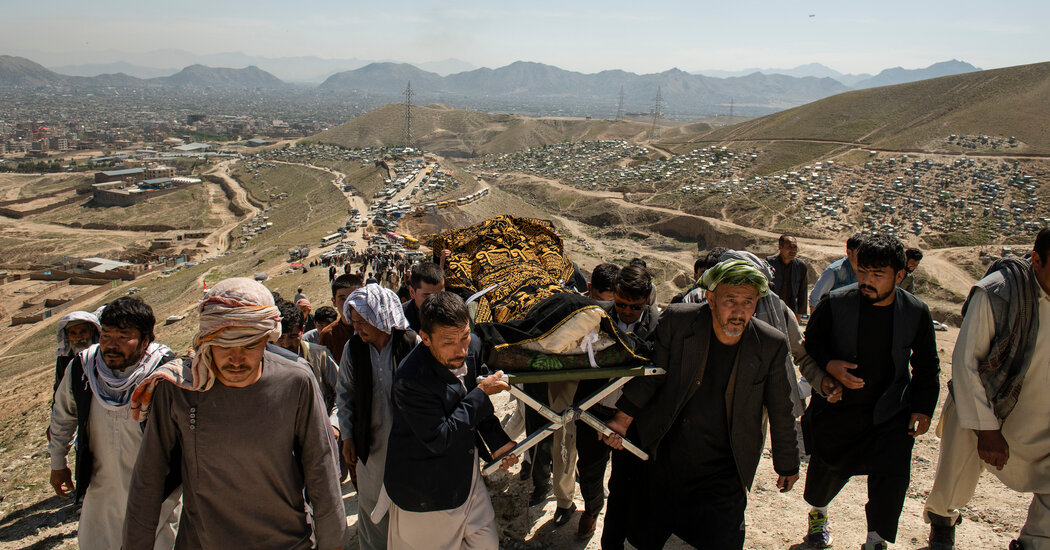 KABUL, Afghanistan — One by one they brought the girls up the steep hill, shrouded bodies covered in a ceremonial prayer cloth, the pallbearers staring into the distance. Shouted prayers for the dead broke the silence.

The bodies kept coming and the gravediggers stayed busy, straining in the hot sun. The ceaseless rhythm was grim proof of the preceding day’s news: Saturday afternoon’s triple bombing at a local school had been an absolute massacre, targeting girls. There was barely room atop the steeply pitched hill for all the new graves.

The scale of the killing and the innocence of the victims seemed further unnerving proof of the country’s violent unraveling, as the Taliban make daily gains and the government seems unable to halt their advances or protect its people from mass killings. On Sunday there were mourners everywhere in the neighborhood of the bombing, home to the persecuted Shiite Hazara ethnic minority, but hardly any security to protect them.

The death toll exceeded even previous massacres in this bustling neighborhood of a minority long singled out for persecution by the Taliban and, in recent years, the Islamic State. Afghanistan’s second vice president, Sarwar Danesh, himself a Hazara, said more than 80 people had been killed in the attack.

attack on a wrestling club that killed 20, the school attack that August in which 34 students were killed, and the 2017 mosque bombing in which 39 died. Not to mention the massacres of Hazara in the civil war-torn Kabul of the early 1990s by the forces of warlord Abdul Rasul Sayyaf and his ally, Ahmad Shah Massoud, now revered — not by Hazaras — as a national hero.

The absence of government security forces Sunday, even though funerals are often targeted by the extremists, prompted some to say that the community could rely only on itself.

“If we want to protect ourselves, men and women should pick up guns,” said Ghulam, the day laborer.

The attack “compels Hazaras to pick up guns and defend themselves,” said Arif Rahmani, a Hazara member of Parliament. “Whether the government likes it not, people will stand up and provide themselves with their own security,” he said. “Hazaras will have to make their own decisions,” he said. “There will be gunmen on every corner and street of their neighborhoods.”

Outside the school Sunday a crowd surrounded an elderly man shouting, “God, please help us!” A man listening said: “The only option is to take up guns. We just buried an 11-year-old girl. What is her crime?”

The man, Qasim Hassani, a vendor, continued: “If the government doesn’t stop these terrorists from coming into our neighborhoods, we will do it. Today I am just a vendor. But if they keep pushing, I will be the next Alipur.”

President Ashraf Ghani proclaimed Tuesday a national day of mourning for the victims.

The blast was so powerful it shattered the windows of stores a considerable distance down the street.

“It’s terrifying,” said Naugiz Almadi, a mother clutching her young daughter outside the school. “Hazaras have nothing to protect them. Only God.”

AUSTIN, Texas--(BUSINESS WIRE)--As the first multifamily management company to be recognized in the Public Relations and Marketing Excellence Awards, … END_OF_DOCUMENT_TOKEN_TO_BE_REPLACED

There have been whispers of cooling housing and rental prices in the San Francisco Bay Area, but that hasn't yet translated into practical, noticeable … END_OF_DOCUMENT_TOKEN_TO_BE_REPLACED

Cars pass in Independence Square at twilight in Kyiv, Ukraine, Monday, Oct. 31, 2022. Rolling ... [+] blackouts are increasing across Ukraine as the … END_OF_DOCUMENT_TOKEN_TO_BE_REPLACED