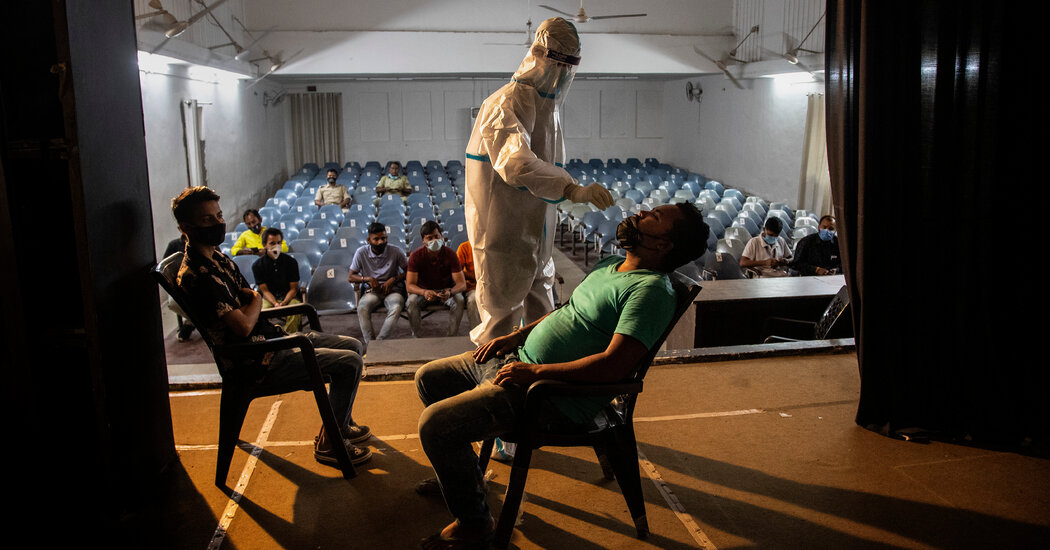 The United States will begin restricting travel from India later this week, but similar limitations on air travel from China that President Trump imposed in the early days of the pandemic proved to be ineffectual.

“We can ban all the flights we want but there is literally zero way we can keep these highly contagious variants out of our country,” said Dr. Ashish Jha, the dean of the Brown University School of Public Health.

What are variants and why should we care?

As the coronavirus spreads among human hosts, it invariably mutates, creating opportunities for new variants that can be more transmissible or even deadly. One highly contagious variant, known as B.1.1.7, crushed Britain earlier this year and is already well entrenched in the United States and Europe.

60 percent more contagious and 67 percent more deadly than the original form of the virus. Another worrisome variant, P.1, is wreaking havoc across South America.

Over the weekend, India recorded 401,993 new cases in a single day, a world record, though experts say its true numbers are far higher than what’s being reported. Peru, Brazil and other countries across South America are also experiencing devastating waves.

Virologists are unsure what is driving India’s second wave. Some have pointed to a homegrown variant called B.1.617, but researchers outside of India say the limited data suggests that B.1.1.7 may be to blame.

I’m already vaccinated. Should I be worried?

With 44 percent of adults having received at least one dose, the United States has made great strides vaccinating its citizens, though experts say the country is far from reaching so-called herd immunity, when the virus can’t spread easily because it can’t find enough hosts. Vaccine hesitancy remains a formidable threat to reaching that threshold.

In much of the world, however, vaccines are still hard to come by, especially in poorer countries. In India, less than 2 percent of the population has been fully vaccinated. “If we want to put this pandemic behind us, we can’t let the virus run wild in other parts of the world,” Dr. Jha said.

effective against the variants, although slightly less so against some.

“For now the vaccines remain effective, but there is a trend toward less effectiveness,” said Dr. Céline Gounder, an infectious disease physician and epidemiologist at Bellevue Hospital in New York.

Vaccine makers say they are poised to develop booster shots that would tackle especially troublesome variants, but such a fix would be of little help to poorer nations already struggling to obtain the existing vaccines. Experts say the best way to head off the emergence of dangerous variants is to tamp down new infections and immunize most of humanity as quickly as possible.

Dr. Michael Diamond, a viral immunologist at Washington University in St. Louis, said that the longer the coronavirus circulates, the more time it has to mutate, which could eventually threaten vaccinated people; the only way to break the cycle is to ensure countries like India get enough vaccines.

“In order to stop this pandemic, we have to vaccinate the whole world,” Dr. Diamond said. “There will be new waves of infection over and over again unless we vaccinate at a global scale.”

If you’ve ever dreamed of a quiet life on a boat in Alaska, this new waterfront listing can help you realize that vision.Of course, there's always … END_OF_DOCUMENT_TOKEN_TO_BE_REPLACED