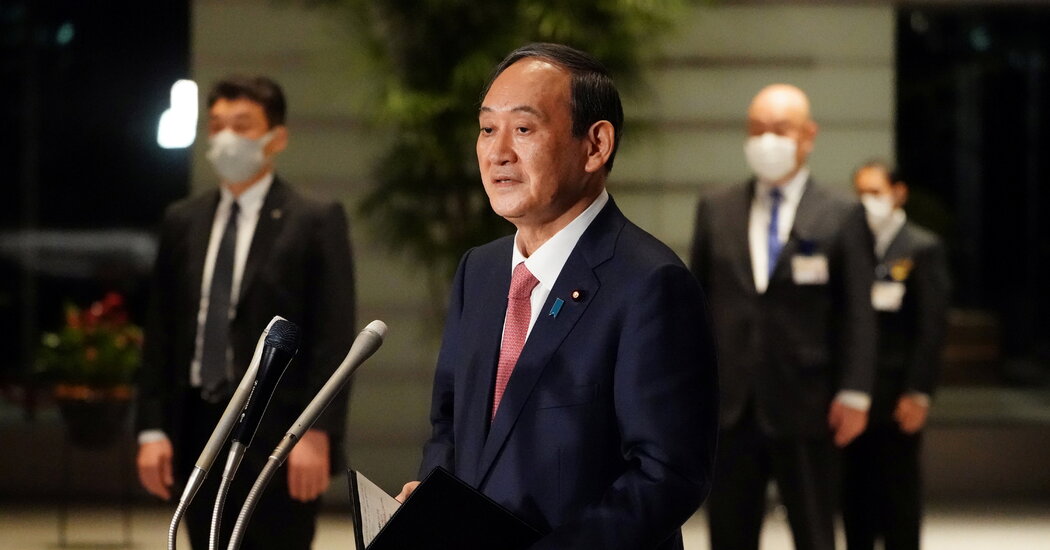 TOKYO — As he visits Washington this week, it would seem as if Prime Minister Yoshihide Suga of Japan could take a victory lap.

Mr. Suga is the first foreign leader to be invited to the White House by President Biden, who has vowed to reinvigorate alliances. Japan already had the distinction last month of being the first international destination for the new U.S. secretaries of state and defense. And Mr. Suga will not have to contend with threats of higher tariffs or the need for constant flattery that drove Mr. Biden’s mercurial predecessor.

But even as relations between the two countries are calming, Japan faces a perilous moment, with the United States prodding it to more squarely address the most glaring threat to stability in Asia: China.

It is the latest step in an age-old dance between the two countries. Ever since the United States forged an alliance with Japan during its postwar occupation, Tokyo has sought reassurance of protection by Washington, while Washington has nudged Tokyo to do more to secure its own defense.

Jennifer Lind, an associate professor of government at Dartmouth College and a specialist in East Asian international security.

“The U.S.-Japan alliance is at a crossroads,” Ms. Lind said. “The alliance has to decide how do we want to respond to the growing threat from China and to the Chinese agenda for international order.”

Analysts and former officials said it was time for Japan to expand its thinking about what a summit with its most important ally could accomplish.

repeatedly ignored diplomatic or legal efforts to contain its aggressive actions in both the South China and East China Seas, some say Japan needs to be more specific about what it might do in the event of a military conflict.

“Who doesn’t want freedom and openness?” said Jeffrey Hornung, an analyst at the RAND Corporation. “By signing up for those things, you subtly take a jab at China. But what are you going to do when those things you say you’re going to defend come under attack?”

Japanese leaders usually use summits with American presidents to seek assurances that the United States, which has about 50,000 troops stationed in Japan, would defend the country’s right to control the uninhabited Senkaku Islands. Over the past year, China, which also claims the islands, has sent boats into or near Japan’s territorial waters around the islands with increasing frequency.

Taiwan Strait, where China has been dispatching warplanes to menace the democratic island, which Beijing considers a rogue territory. When Defense Secretary Lloyd J. Austin III and Secretary of State Antony J. Blinken visited Tokyo last month, they and their Japanese counterparts issued a statement stressing “the importance of peace and stability in the Taiwan Strait.”

The gritty details of how Japan might support the United States and Taiwan in the case of an invasion by Beijing are probably beyond the scope of this week’s talks. While Mr. Biden is unlikely to make any blunt demands that Japan pay more for its defense, as President Donald J. Trump did, the current president could amplify recent signals from his administration about efforts to deter China. One possibility is that Japan could be asked to host long-range missiles, a proposal that would probably face significant domestic opposition.

Mr. Biden and Mr. Suga are expected to discuss not just China’s military actions, but also its human rights record, as well as the coup in Myanmar — likely areas of difference between the leaders.

The Biden administration has called China’s repression of Uyghur Muslims in the Xinjiang region a genocide and imposed sanctions on Chinese officials. It has also placed sanctions on military generals in Myanmar. But Japan tends to be more circumspect in addressing human rights or taking direct actions such as economic sanctions.

fear of backlash, and an understanding that Beijing can turn off the spigot at any time.

Tsuneo Watanabe, a senior fellow at the Sasakawa Peace Foundation in Tokyo, noted that at the outset of the pandemic, China designated certain medicines and surgical masks as “strategic goods” and stopped shipping them to Japan. “We can no longer rely on the free flow of goods from China,” Mr. Watanabe said.

Some Japanese officials say Mr. Suga should not rush to follow Mr. Biden’s harder line on China and Myanmar. Kunihiko Miyake, a former Japanese diplomat who advises Mr. Suga, said Japan’s approach to such countries is “more dialogue than punishment.”

hosting a climate summit next week. One goal is to persuade Japan to stop its financial support of coal projects abroad, which it has already started to reduce.

decision to host the Olympic Games this summer.

The trip’s success may depend in part on whether Mr. Suga develops a rapport with Mr. Biden. Seasoned watchers of Japan will be closely tracking Mr. Suga, who is not known for his charisma, especially after his predecessor, Shinzo Abe, spent considerable time and effort wooing Mr. Biden’s predecessor.

“We have two older and very traditional politicians in a lot of ways,” said Kristin Vekasi, an associate professor of political science at the University of Maine. “I will be curious to see what they do.”

AUSTIN, Texas--(BUSINESS WIRE)--As the first multifamily management company to be recognized in the Public Relations and Marketing Excellence Awards, … END_OF_DOCUMENT_TOKEN_TO_BE_REPLACED

There have been whispers of cooling housing and rental prices in the San Francisco Bay Area, but that hasn't yet translated into practical, noticeable … END_OF_DOCUMENT_TOKEN_TO_BE_REPLACED

Cars pass in Independence Square at twilight in Kyiv, Ukraine, Monday, Oct. 31, 2022. Rolling ... [+] blackouts are increasing across Ukraine as the … END_OF_DOCUMENT_TOKEN_TO_BE_REPLACED