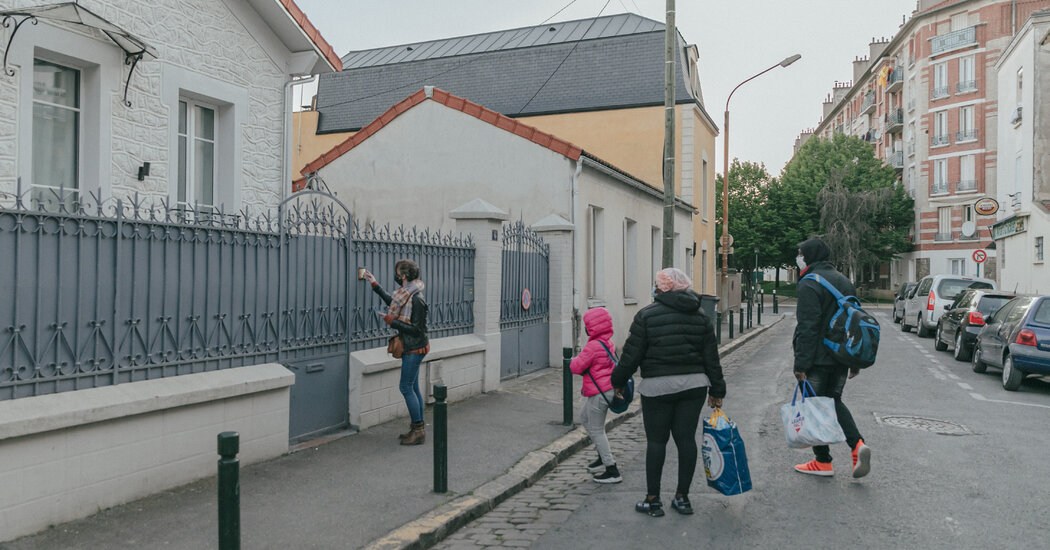 PARIS — Walking home one night several years ago in a suburb of Paris, Raphaël Marre was horrified to see a group of migrants and asylum seekers sleeping on the street outside his home.

Why wasn’t the government housing them? he wondered. After witnessing the same scene for several weeks, he and his wife decided to do it themselves, signing up with a nonprofit that links migrants with people in the Paris region willing to open up their homes for a few nights.

“That was a triggering moment,” Mr. Marre said. “We thought, ‘This can’t be happening, we have to do something.’”

Five years after a migrant crisis that convulsed Europe, France is still struggling to accommodate the thousands of people who have applied for asylum in France. And Mr. Marre is still welcoming them into his home.

France, and much of Europe, was facing a large influx of migrants from the Middle East and Africa, driven from their homes by war and economic deprivation.

introduced an initiative that would create 4,500 new spaces in 2021. However, it is “still far from enough to meet the needs,” said Ms. Le Coz.

France’s struggle to accommodate migrants and asylum seekers has become particularly conspicuous in the streets of the Paris region. In what has become a seemingly never-ending cycle, the police regularly clear out hundreds of migrants and raze their tents and shacks, often offering them no alternative but to move somewhere else.

Utopia 56 relies on a network of volunteers, private citizens, parishes and private companies that have sheltered nearly 3,000 people during the pandemic.

Xavier Lachaume, 31, and his wife have hosted eight families in their apartment in Saint-Denis, a northern Paris suburb, since January. For now, visitors stay in their spare bedroom for a couple of nights, which they plan to turn into a room for a baby they expect in coming months.

82,000 asylum applications in 2020, according to Eurostat, Europe’s statistics agency. First-time applicants declined more than 40 percent from 2019, a drop partly attributed to the coronavirus. But Mr. Manzi predicts another surge once the pandemic passes.

President Emmanuel Macron told Brut, an online news site, in December that “the slowness of our procedures means that” asylum seekers “can indeed find themselves for weeks and months” without proper accommodation.

right-wing politicians and conservative news media increasingly drawing a link between illegal migration and terrorism. Mr. Macron’s government has adopted a tougher approach on immigration, hoping that lures voters away from the far right.

Mr. Sanogo said he had arrived in France in 2016 after fleeing Ivory Coast, citing continuing turmoil stemming from the 2011 civil war that tore apart the country, and has lived in a series of workers’ hostels, making money off the books as a construction worker. His wife and their 9-year-old daughter joined him last month, but they were not allowed to stay in his hostel, forcing them to sleep in the Gare de Lyon train station in Paris.

Mr. Sanogo, 44, said his asylum application when he arrived in 2016 had been rejected because he did not make the request in Italy, where he first arrived in Europe, as he was supposed to do under E.U. rules. But he said he had an appointment with a lawyer to make a new application in France, this time with his family.

As he boarded the Metro with his family to go to their hosts, Mr. Sanogo recounted how he had made his away from Ivory Coast to Libya, were he said he was beaten up and robbed by traffickers, and eventually made it to Italy after a perilous boat trip across the Mediterranean.

Mr. Sanogo seemed grateful for Mr. Marre’s hospitality, but mindful that it was only for a night, said he had hidden a bag full of clothes and sheets on the outskirts of Paris.

“If we have to sleep outside,” he said.

The Seattle Seahawks are very much still in the running for Baker Mayfield. (Photo by Stacy ... [+] Revere/Getty Images) Getty Images The Seattle … END_OF_DOCUMENT_TOKEN_TO_BE_REPLACED

(CNN) — Kim Kyung-seop recalls going to cheap bars after class with his friends, where they binged on as much makgeolli as possible. "You know the … END_OF_DOCUMENT_TOKEN_TO_BE_REPLACED