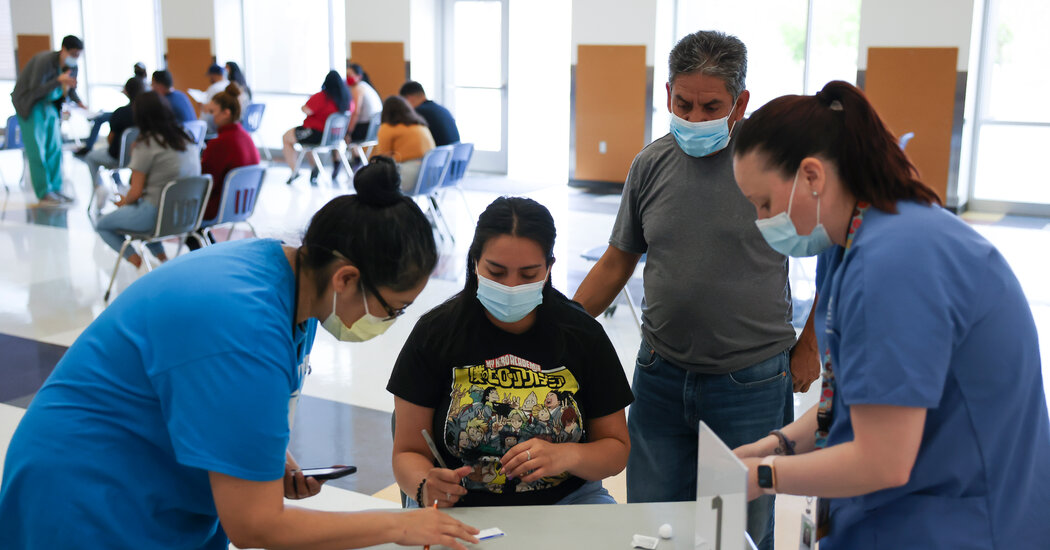 The world’s first mass coronavirus inoculation campaign for children kicked off in earnest in the United States on Thursday after the federal government recommended making the Pfizer-BioNTech vaccine available to those aged 12 to 15.

Even as the decision was embraced by millions of parents wearied by pandemic restrictions and desperate to get their children back into classrooms, states, counties and school districts around the country were trying to figure out the most reassuring and expedient ways to offer the shots.

The various authorities were making plans to offer vaccines not only in schools, but also at pediatricians’ offices, day camps, parks and even beaches.

President Biden, who hailed the vaccine as “safe, effective, easy, fast and free,” said that as many as 20,000 pharmacies stood ready to start giving shots on Thursday.

recommend use of the vaccine.

Some states, including Delaware, Georgia and Maine, had already started to offer doses to children after the authorization of the vaccine by the Food and Drug Administration on Monday.

But the ruling by the C.D.C. was the final step in the federal process that allows for widespread inoculations of the roughly 17 million children in the United States ages 12-15.

For many parents, it could not come too soon. About one-third of eighth graders, usually 13 or 14 years old, are still in remote learning.

But the authorities must also overcome a significant amount of hesitancy. A recent survey by the Kaiser Family Foundation found that many parents — even some who eagerly got their own coronavirus shots — were reluctant to vaccinate pubescent children.

health authorities require anyone younger than 18 to be accompanied by a parent, guardian or responsible adult and to present photo identification and verification of age, county officials said.

In Maine, a parent does not need to be with the child as long as the adult provides permission over the phone or signs a form beforehand.

Federal and local officials said that there should be no problem with supply meeting demand. The expansion of the U.S. vaccination effort underscored the widening gulf in the world’s inoculation campaigns even as the pandemic gathers force in several regions.

Referring to the global situation, Dr. Oliver Morgan, director of the risk assessment department at the W.H.O., said on Wednesday, “Throughout the month of March and April, there has been a steady increase in the number of cases each week and the weekly number of cases is now higher than any time in the pandemic.”

At the same time, many of the countries being walloped by the virus — and those where the threat of new outbreaks is growing — have not been able to secure vaccines to inoculate even health workers or those most at risk of serious illness and death.

Research shows that children are mostly spared severe disease and are not significant drivers of coronavirus spread, as they are for influenza, for example.

Young children are thought to spread the virus less often than adults do, but their ability to transmit increases with age. Teenagers may transmit the virus as readily as adults.

Vaccinating children is viewed as an important increase to the level of immunity in a population, driving down the number of cases broadly, while offering protection to more people.

While risk of severe illness in youngsters is low compared with that in adults, the coronavirus has infected more than 1.5 million children and sent more than 13,000 to hospitals, more than are hospitalized for flu in an average year, according to data collected by the C.D.C.

The Seattle Seahawks are very much still in the running for Baker Mayfield. (Photo by Stacy ... [+] Revere/Getty Images) Getty Images The Seattle … END_OF_DOCUMENT_TOKEN_TO_BE_REPLACED

(CNN) — Kim Kyung-seop recalls going to cheap bars after class with his friends, where they binged on as much makgeolli as possible. "You know the … END_OF_DOCUMENT_TOKEN_TO_BE_REPLACED