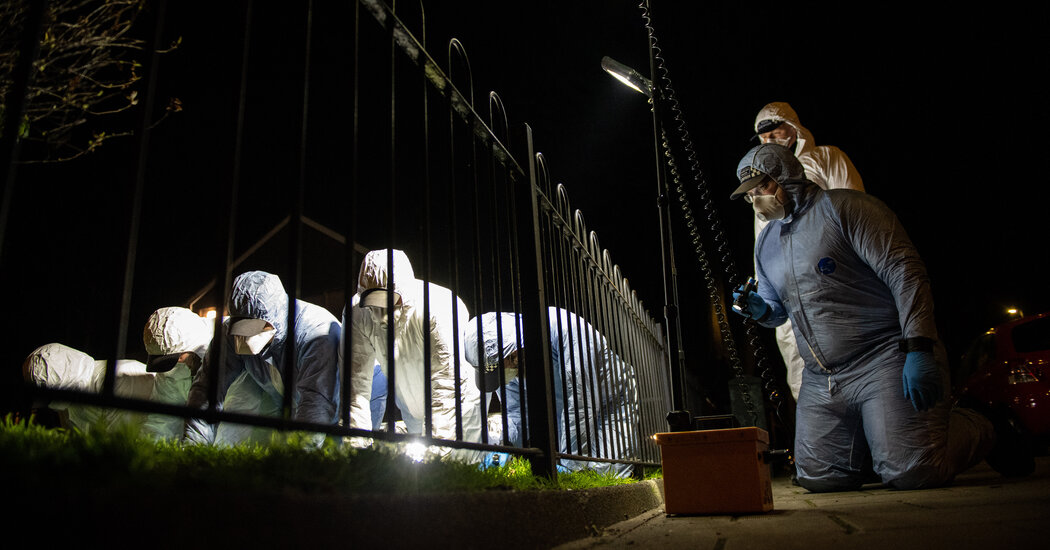 LONDON — Thousands of women across Britain have shared stories online of harassment and fear in public spaces after a woman went missing in London last week and a police officer was arrested in connection with the case.

Many women urged the authorities to make streets safer and address gender violence at a time when pandemic lockdown restrictions have emptied the country’s streets.

“We’re scared, we’re shaken and we’re intimidated,” Mandu Reid, the leader of the Women’s Equality Party, who is running for mayor of London in an election in May, said in an interview.

“While we have been confined to our homes, going out for walks has been an important release,” Ms. Reid said. “Now this has happened, and we feel under threat and under siege.”

Sarah Everard, a 33-year-old marketing executive, was last seen on March 3 in the Clapham neighborhood of south London. The police said on Wednesday that human remains had been found as part of their investigation into her disappearance, prompting an outpouring of grief from lawmakers, community leaders and London residents.

70 percent of women in Britain had experienced sexual harassment in public.

Online, women offered countless testimonies about facing catcalls, unwanted attention, threats and assaults in public spaces. As Ms. Everard’s name trended on Twitter in Britain on Thursday, stories included recollections of anxious walks, of being followed in the streets and having to run and of being harassed in a public space.

Women also listed measures they felt compelled to take to mitigate risks, such as sharing with other women the addresses of places they go at night, keeping keys clenched in their hands as a weapon, choosing better-lit routes in the hope of avoiding danger, and having an app that sends a text with the person’s location when it detects a scream.

“Headphones at lowest volume, keys clenched in my hand, rape alarm in my pocket, fearful of the dark at 8.30 p.m.,” Joanna Montgomery, a 43-year-old London resident, wrote on Twitter as she shared a picture of walking two dogs on a street.

While city officials have acknowledged that “too many women feel unsafe when traveling, working or going out at night,” activists and community leaders say little has been done to make the streets safer amid lockdown restrictions, when walking remains one of the few activities that people are allowed to do in public.

Ms. Everard left a friend’s house in south London around 9 p.m. on March 3. Her journey back home should have taken her around 50 minutes, and she was last spotted on CCTV at 9:30 p.m. near a road intersection in a residential area.

Police officers have searched hundreds of houses in the neighborhood, as well as ponds in a park, Clapham Common, that Ms. Everard may have walked through that night.

But hopes that she would be found alive grew slimmer on Wednesday evening, when Ms. Dick said that officers had found human remains in Kent, around 50 miles southeast of London. Ms. Dick said the police could not confirm the identity of the remains, adding that doing so could take “considerable time.”

Ms. Everard’s disappearance is likely to add pressure to Mr. Johnson’s government, which plans to introduce measures to address violence against women and girls this year. According to national statistics, more than 55,000 rapes were recorded in England and Wales in 2019 and 2020, and one in five women in Britain will be subjected to sexual assault during their lifetime.

It was even more shocking to many that the main suspect in Ms. Everard’s disappearance was a police officer. The Metropolitan Police said on Tuesday that the man, in his 40s, had been arrested on Tuesday in Kent and was being kept in custody on suspicion of kidnapping, murder and indecent exposure. A woman in her 30s was arrested at the same location on suspicion of assisting an offender.

The officer, who serves in the Parliamentary and Diplomatic Protection Command, and whose primary role was to patrol diplomatic premises, was not on duty when Ms. Everard disappeared, the police said.

On Wednesday Ms. Dick, the Metropolitan Police commissioner, sought to quell any mistrust the public may have about the force she oversees.

“I speak on behalf of all my colleagues when I say that we are utterly appalled at this dreadful, dreadful news,” she said.

But Ms. Reid, the leader of the Women’s Equality Party, said that even beyond devoting more funding to address gender violence and improving city planning to protect women, the police had a lot to do to win women’s trust.

“It’s not about safety — it’s about freedom in the public space,” Ms. Reid said. “Most of us have accepted that the streets are too dangerous for us,” she added. “But we can’t accept this any longer.”

On a landlocked street corner at the entrance to the South Street Seaport stands a shabby, rust-streaked old lighthouse, its lantern dark, dwarfed by … END_OF_DOCUMENT_TOKEN_TO_BE_REPLACED

Kohl's announced Friday that it is terminating talks to sell its business, saying that retail environment has significantly deteriorated since the … END_OF_DOCUMENT_TOKEN_TO_BE_REPLACED