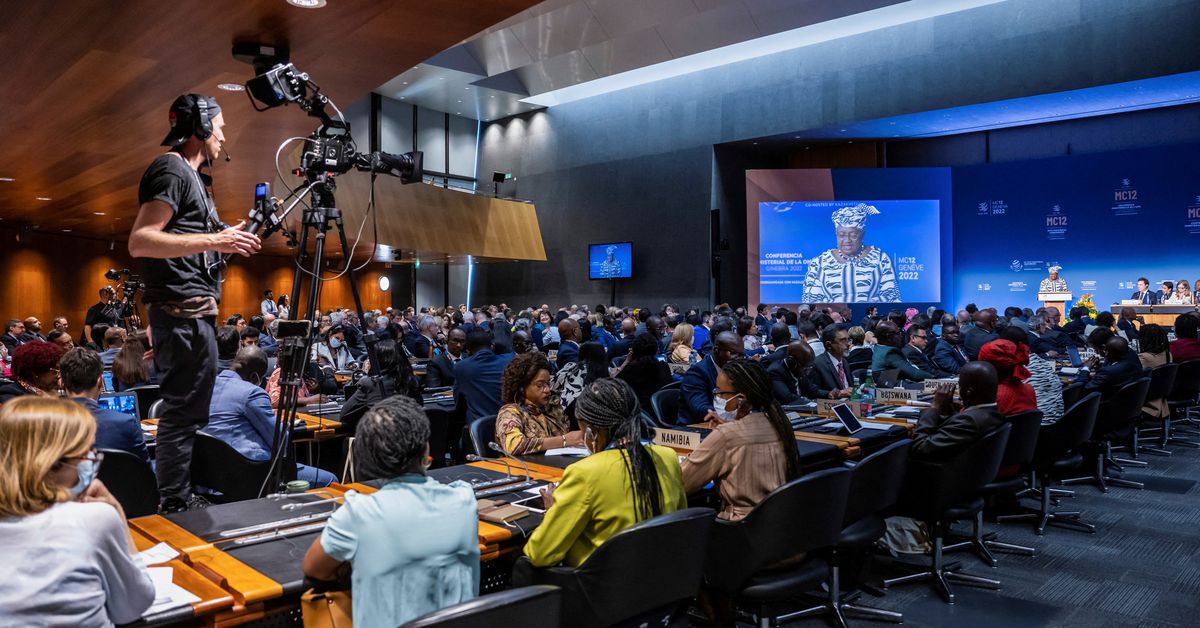 A general view of the room during the speech of Director-General of the World Trade Organisation (WTO) Ngozi Okonjo-Iweala at the opening ceremony of the 12th Ministerial Conference (MC12), at the World Trade Organization, in Geneva, Switzerland, June 12, 2022. Martial Trezzini/Pool via REUTERS

GENEVA, June 16 (Reuters) – Major members of the World Trade Organization reached an initial deal on Thursday, winning over India which said it was confident more global accords could be achieved as negotiations on fishing, vaccines and food security entered their final hours.

Ministers from more than 100 countries convened at the global trade watchdog’s headquarters in Geneva this week for the first time in more than four years to agree new trade rules, a feat many thought unlikely in an era of high geopolitical tensions. read more

The body’s 164 members must all agree for new rules to pass, meaning that one member alone can block deals.

During the June 12-15 meeting, extended into the evening of a fifth day on Thursday, that member has been India.

However, a provisional agreement to extend a moratorium on applying duties to electronic transmissions until at least 2023 was reached despite earlier opposition from New Delhi. read more

Indian Commerce Minister Piyush Goyal, who had struck a defiant stance on a range of topics earlier in the week, told journalists he expected more “solid decisions” to come.

New Delhi, which has a history of blocking multilateral negotiations, has previously stuck to long-held demands to maintain subsidies for fisheries and agriculture and pushed for extra reforms, trade sources said.

India maintains it is fighting to protect livelihoods in developing nations.

Delegates were more upbeat on Thursday about a package of deals with trade-offs possible, without specifying what the compromises would be. EU trade commissioner Valdis Dombrovskis tweeted that members were “getting closer”. WTO deputy director-general Anabel Gonzalez said she was “hopeful”.

Negotiators were in intense talks in the so-called ‘Green Room’ of the WTO for most of the night. U.S. Trade Representative Katherine Tai and Chinese Commerce Minister Wang Wentao were no longer in Geneva, trade sources said.

Negotiations resumed around 0700 GMT Thursday and were expected to conclude in the evening, they added.

One of the possible outcomes of the talks is a pared-back version of a deal designed to curb fishing subsidies that cause over-fishing, a document seen by Reuters showed.

Another is a partial waiver of intellectual property rights for COVID-19 vaccines designed to allow developing countries to produce them and pledges to ease the food security crisis although tussles over the precise wording continued, sources said.

WTO officials have maintained throughout the meetings a belief that deals can be reached, saying talks often look hopeless until a final bargain is reached.

Observers expressed frustration with the process.

“The ministerial (conference) laid bare the increasing dysfunction that inhibits collective action at the WTO,” said Jake Colvin, president of the National Foreign Trade Council, adding that members should not reward “obstructionism”.

AUSTIN, Texas--(BUSINESS WIRE)--As the first multifamily management company to be recognized in the Public Relations and Marketing Excellence Awards, … END_OF_DOCUMENT_TOKEN_TO_BE_REPLACED

There have been whispers of cooling housing and rental prices in the San Francisco Bay Area, but that hasn't yet translated into practical, noticeable … END_OF_DOCUMENT_TOKEN_TO_BE_REPLACED

Cars pass in Independence Square at twilight in Kyiv, Ukraine, Monday, Oct. 31, 2022. Rolling ... [+] blackouts are increasing across Ukraine as the … END_OF_DOCUMENT_TOKEN_TO_BE_REPLACED