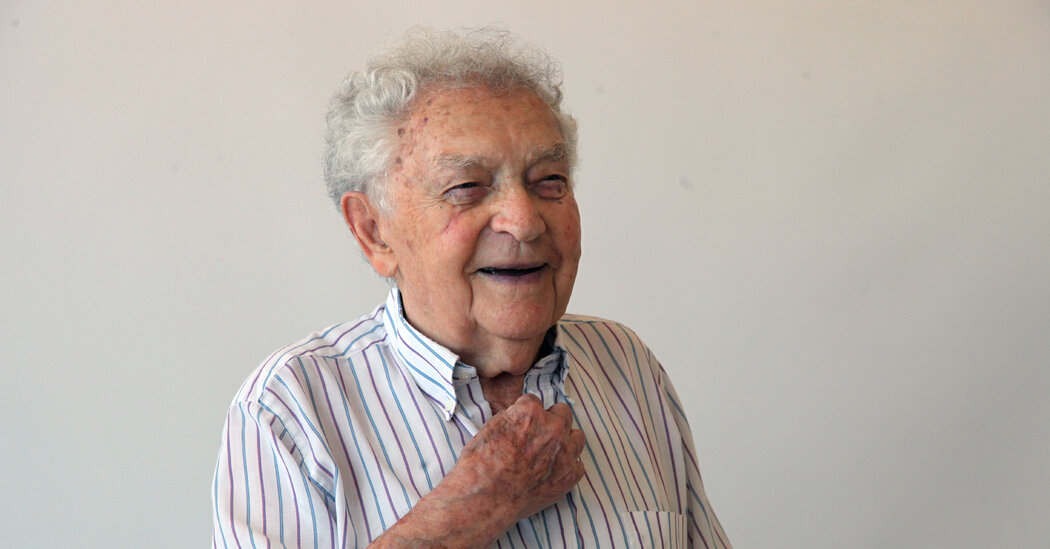 Yitzhak Arad, who as an orphaned teenage partisan fought the Germans and their collaborators during World War II, then went on to become an esteemed scholar of the Holocaust and the longtime chairman of the Yad Vashem remembrance and research center in Israel, died on May 6 in a hospital in Tel Aviv. He was 94.

Yad Vashem announced the death but did not specify the cause.

Mr. Arad was not even bar mitzvahed when the Germans invaded Poland and what is now part of Lithuania in 1939 and began rounding up and murdering Jews and forcing them into ghettos. His parents and 30 close family members would perish before the war ended in 1945.

But he survived, at first as a forced laborer — cleaning captured Soviet weapons in a munitions warehouse — and then, sensing what fate awaited, by smuggling weapons to partisans in the nearby forests and forming an underground movement in the ghetto. He, his sister and their underground associates eventually stole a revolver and escaped, meeting up with a brigade of Soviet partisans.

Acquiring the lifelong nickname Tolya (diminutive for Anatoly), he took part in ambushing German bases in what is now Belarus and setting up mines that blew up more than a dozen trains carrying German soldiers and supplies. Among his exploits was a battle with pro-German Lithuanian partisans in fields and forests covered in deep snow in the village of Girdan.

“We fought with them for a whole day, but by evening none of them remained alive,” he wrote in a 1979 memoir, “The Partisan: From the Valley of Death to Mt. Zion.” “The next day we counted over 250 Lithuanian dead.”

A Zionist since childhood, Mr. Arad made his way to Palestine, then a British mandate, aboard a ship, the Hannah Senesh, filled with immigrants.

He changed his Polish name, Icchak Rudnicki, to the Hebrew, Yitzhak Arad, and joined the fight for an autonomous Jewish land, serving with the Palmach, the elite fighting force that was eventually incorporated into the Israeli Army after Israel declared its independence in 1948. Assigned to an armor brigade, he rose to the rank of brigadier general, retiring in 1972.

He devoted himself to researching the history of the Holocaust, completing a doctorate at Tel Aviv University with a treatise on the destruction of the Jews of Vilna, Lithuania’s capital, now known as Vilnius. He was among the first scholars to study the Jewish partisans in the forests and the ghettos and the systematic murder of Jews by killing squads as the German Army moved deeper into Soviet territory.

“What gave Yitzhak Arad credibility was both the fact that he was a survivor and a historian,” said Abraham H. Foxman, former national director of the Anti-Defamation League. “He could discuss and teach about the Shoah from a very personal perspective.”

When another Palmach veteran, Yigal Allon, became a minister of education and culture, he asked Mr. Arad in 1972 to lead Yad Vashem — which means “a memorial and a name” and is taken from a verse in Isaiah.

A complex of museums, archives and memorial sculptures on a Jerusalem hill, Yad Vashem is considered the world’s leading repository of Holocaust documents, survivor interviews and other material. He served as its chairman of the directorate for more than two decades, until 1993.

“He never forgot,” said Avner Shalev, Mr. Arad’s successor as chairman. “He was part of the most important event for Jews in the 20th century — the Shoah — and he understood that it is an important mission in his life to research and commemorate that event.”

For most of his tenure at Yad Vashem, the Soviet Union and the Eastern European countries in its bloc cut off diplomatic relations with Israel. But Mr. Arad took pride in having established working relationships with archivists in those countries and securing hundreds of thousands documents that detailed the scope of the Holocaust.

Under his leadership, Yad Vashem added a number of monuments, including the Valley of the Communities, 2.5 acres of intersecting walls made of rough-hewed stone blocks engraved with the names of 5,000 Jewish communities, most of which were destroyed in the Holocaust.

He lectured at Tel Aviv University and wrote several books considered essential for scholars, including “The Holocaust in the Soviet Union,” which won a National Jewish Book Award in 2009, and “Belzec, Sobibor, Treblinka: the Operation Reinhard Death Camps,” which chronicled the murder of millions in those death camps.

In 2006, he was briefly the target of a war crimes investigation in Lithuania. A state prosecutor claimed there was evidence that a Soviet partisan band to which he belonged had killed 38 civilians, mostly women and children, in January 1944 in the village of Koniuchy.

Mr. Arad denied ever killing anyone in cold blood and pointed out that the village had been defended by a Lithuanian militia that collaborated with the Nazis. In the international outcry that ensued, historians noted that, at that point, Lithuania had never charged any non-Jews with war crimes despite the thousands of Lithuanians who had collaborated with the Nazis in the slaughter of 200,000 Jews. The case was dropped in 2008.

Mr. Arad was born on Nov. 11, 1926, in the ancient town of Swieciany, then within Poland but now part of Lithuania and known as Svencionys. (Another prominent resident was Mordecai Kaplan, the co-founder of Reconstructionist Judaism.) His father, Israel, was a synagogue cantor, and his mother, Chaya, a homemaker. The family moved to cosmopolitan Warsaw and sent Yitzhak to a Hebrew school. He belonged to a club that was part of the Zionist movement.

After the German blitzkrieg, his parents sent him and his older sister to live with his grandparents in his hometown, Swieciany, thinking they would be safe there. But the Germans occupied the town in June 1941, ordered all the Jews into a ghetto and soon began deportations to death camps and labor camps.

Mr. Arad’s wife, Michal, died in 2015. He is survived by two sons, Giora and Ruli, a daughter, Orit Lerer, 11 grandchildren and 13 great-grandchildren.

Mr. Arad remained active with Yad Vashem until his last weeks. Last year, he took part in a photography exhibition about Holocaust survivors and their lives after the war. When it was his turn to speak, he confronted the audience with a hard truth borne of his own ordeals.

“What happened in the past,” he said, “could potentially happen again, to any people, at any time.”

AUSTIN, Texas--(BUSINESS WIRE)--As the first multifamily management company to be recognized in the Public Relations and Marketing Excellence Awards, … END_OF_DOCUMENT_TOKEN_TO_BE_REPLACED

There have been whispers of cooling housing and rental prices in the San Francisco Bay Area, but that hasn't yet translated into practical, noticeable … END_OF_DOCUMENT_TOKEN_TO_BE_REPLACED

Cars pass in Independence Square at twilight in Kyiv, Ukraine, Monday, Oct. 31, 2022. Rolling ... [+] blackouts are increasing across Ukraine as the … END_OF_DOCUMENT_TOKEN_TO_BE_REPLACED