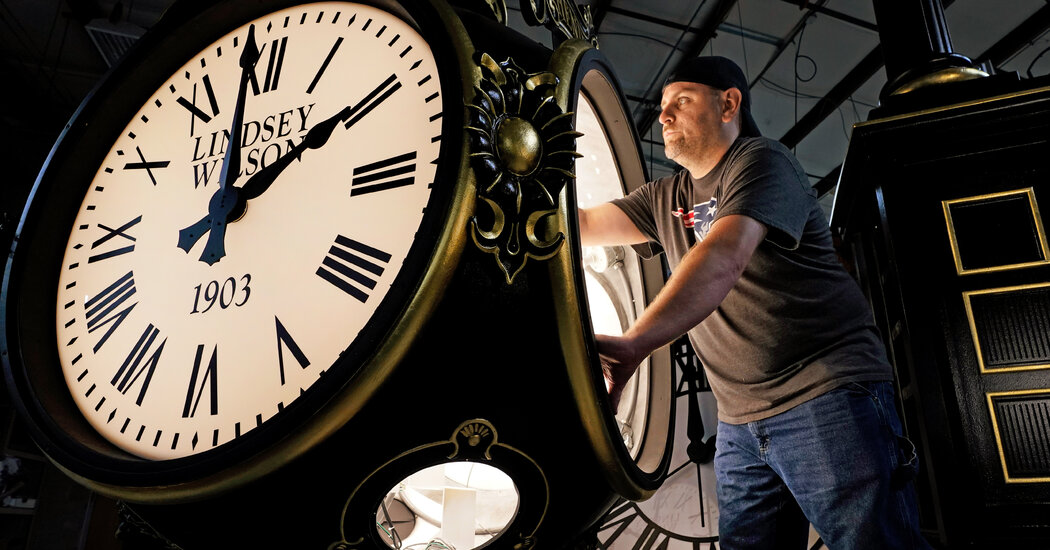 “There was the threat of federal intervention in all of this, so the railroads decided they were going to police themselves,” said Carlene Stephens, a curator at the National Museum of American History. Scientists were also urging a standardized system for marking time, she said.

In North America, a coalition of businessmen and scientists decided on time zones, and in 1883, U.S. and Canadian railroads adopted four (Eastern, Central, Mountain and Pacific) to streamline service. The shift was not universally well received. Evangelical Christians were among the strongest opponents, arguing “time came from God and railroads were not to mess with it,” Ms. Stephens said.

The introduction of time zones prompted fears of a kind of 19th-century Y2K. “Jewelers were busy yesterday answering questions from the curious, many of whom seemed to think that the change in time would generally create a sensation, a stoppage of business, and some sort of a disaster, the nature of which could not be exactly ascertained,” The New York Times reported in November 1883.

Once the time zone business was settled, it wasn’t long until Franklin’s idea for daylight saving was refashioned for the industrial world. In the 1900s, an English builder, William Willet, urged British lawmakers to shift the clocks to reap economic benefits. Parliament rejected the proposal in 1909, only to embrace it a few years later under the pressures of World War I. In 1916, Germany was the first European nation to enact the policy in an effort to cut energy costs, and over the next few years several Western nations followed suit. In the United States, the federal government took oversight of time zones in 1918. And in March of that year, the country lost its first hour of sleep.

One of the oldest arguments for daylight saving time is that it can save energy costs. There have been many conflicting studies about whether actually it does.

A Department of Energy report from 2008 found that the extended daylight saving time signed by George W. Bush in 2005 saved about 0.5 percent in total electricity use per day. Also that year, a study by the National Bureau of Economic Research found that the shift in daylight saving time, “contrary to the policy’s intent,” increased residential electricity demand by about 1 percent, raising electricity bills in Indiana by $9 million per year and increasing pollution emissions.

But daylight saving time still has fervent supporters, especially among business advocates who argue it helps drive the economy.

SAN FRANCISCO — Cleve Jones has lived in the Castro neighborhood for nearly 50 years, almost from the day he graduated from high school in Phoenix and … END_OF_DOCUMENT_TOKEN_TO_BE_REPLACED

A home inspection can spare you from unpleasant surprises after you buy. After crunching the numbers, searching your favorite neighborhoods, and … END_OF_DOCUMENT_TOKEN_TO_BE_REPLACED