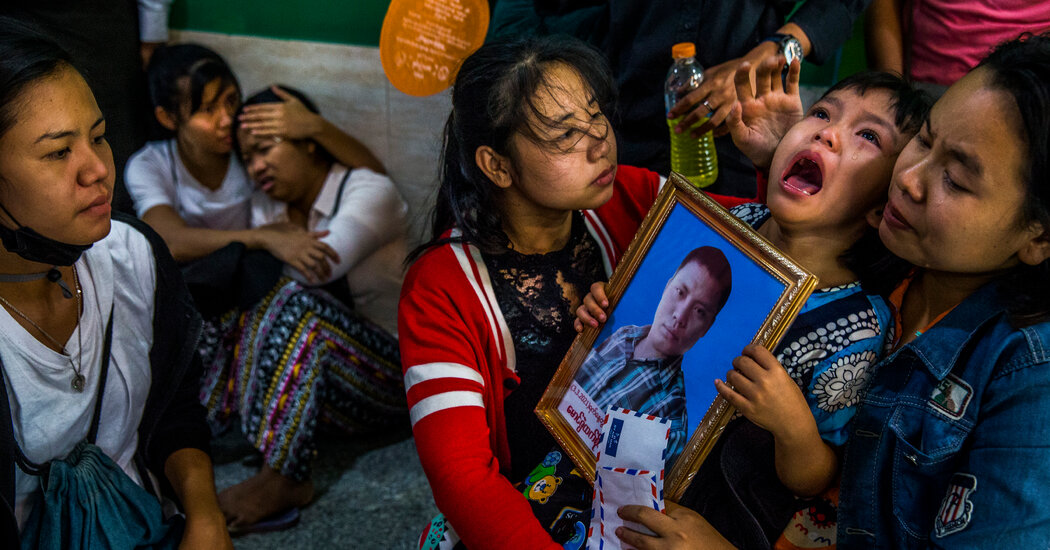 The military’s ‘heart of darkness’ in Myanmar

The military and its brutal practices have been on the global stage since a coup last month. The generals are now fully back in charge, and the Tatmadaw, as the military is known, has turned its guns on the masses, who have mounted a nationwide civil disobedience movement.

But the military has a long legacy of atrocities that has instilled an omnipresent fear in Myanmar.

During the last three years, the Tatmadaw has waged war against ethnic rebel armies in three states, Rakhine, Shan and Kachin, displacing 700,000 Rohingya Muslims. Survivors and witnesses described to us the campaign, which has included killings, systemic rape and abuse. Men and boys were often used as human shields by the soldiers.

In October, Sayedul Amin, a 28-year-old Rohingya man, was fishing when he and others were rounded up by soldiers. “We were ordered to walk in front of the soldiers,” he said. “It seems that they wanted us to shield them if anyone attacked.” He was hit by two bullets.

Quotable: “This is an army with a heart of darkness,” said David Scott Mathieson, an independent analyst. “This is an unrepentant institution.”

the latest updates and maps of the pandemic.

neglected electric cars while dominating the global market for gasoline-electric hybrids. Automakers around the world are making bold pledges to transition to electric fleets, and national governments are issuing mandates to increase electric-car sales or to ban gasoline-burning vehicles. Japan’s auto industry could be left behind.

Power player: Akio Toyoda, president of Toyota and chairman of the Japan Automobile Manufacturers Association, has accused the Japanese news media of inflating the commercial and environmental value of all-electric vehicles. His company, which is the worldwide leader in hybrid car sales, sets the tone for the industry. Toyota is also heavily invested in clean-burning hydrogen, a technology that has yet to go mainstream.

Prince Harry has often spoken with anguish about what happened to his mother when she was cast out of the royal family after her divorce from Prince Charles and later died in a car wreck. He made an explicit comparison during the bombshell interview on Sunday when he referred to the “constant barrage” of criticism and racist attacks on his wife.

Royal family: Buckingham Palace issued a statement on Tuesday in response to an explosive interview with Prince Harry and Meghan Markle, saying the family was “saddened to learn the full extent of how challenging the last few years have been” for the couple. The queen said the issues raised were “very concerning” and would be addressed by the family.

Catalonian crisis: The European Parliament has stripped the immunity of Carles Puigdemont, the former separatist leader of Catalonia, clearing the way for another attempt by Spain to extradite and try him on sedition charges. Now it is up to the Belgian judiciary to rule on sending him back.

many have come to make a new start — and they even saved the school from closing.

Atlantic article about how the internet doesn’t have to be terrible.

creamy braised white beans are simmered with milk, a whole head of garlic, herbs and nutmeg for a rich vegetarian dinner that can be on the table in under a half-hour.

Watch: A romance between a refugee and an escaped child bride is at the heart of the animated film “Bombay Rose.”

Listen: At the 63rd annual Grammy Awards on Sunday, there will be no shortage of big-name matchups in the major categories. Beyoncé, Taylor Swift and Dua Lipa dominate the nominations.

For a fascinating book or a fabulous recipe, turn to our At Home collection of ideas on what to read, cook, watch, and do while staying safe at home.

Last month, Apple TV+ released “Billie: The World’s a Little Blurry,” a documentary depicting the rise of the singer Billie Eilish and the creation of her Grammy-winning debut album. It follows other recent documentaries about pop stars including Justin Bieber, Beyoncé and the girl group Blackpink.

The artists or their labels helped produce all of these films, which promise an unvarnished glimpse into the lives of the performers. That’s not quite what they deliver.

That’s it for this briefing. See you next time.

Thank you
Whet Moser, Carole Landry and Amelia Nierenberg contributed to today’s briefing. Sanam Yar wrote the Back Story. Theodore Kim and Jahaan Singh provided the break from the news. You can reach the team at briefing@nytimes.com.

P.S.
• We’re listening to “The Daily.” Our latest episode is about a provision in the U.S. relief bill that would offer a child tax credit.
• Here’s our Mini Crossword, and a clue: Dominant personality (five letters). You can find all our puzzles here.
• Our Beirut bureau chief Ben Hubbard joined Christiane Amanpour on PBS to discuss U.S.-Saudi Arabia relations.

MIAMI--(BUSINESS WIRE)--Intelli Smart Homes, the leading smart home technology company, has been recognized as one of America’s fastest-growing … END_OF_DOCUMENT_TOKEN_TO_BE_REPLACED

Customers outside a Walmart store in Torrance, California, US, on Sunday, May 15, 2022. Walmart Inc. is scheduled to release earnings figures on May … END_OF_DOCUMENT_TOKEN_TO_BE_REPLACED

The past few years have been brutal on homebuyers' budgets. Would-be buyers have been priced out of some of the most desirable neighborhoods thanks to … END_OF_DOCUMENT_TOKEN_TO_BE_REPLACED