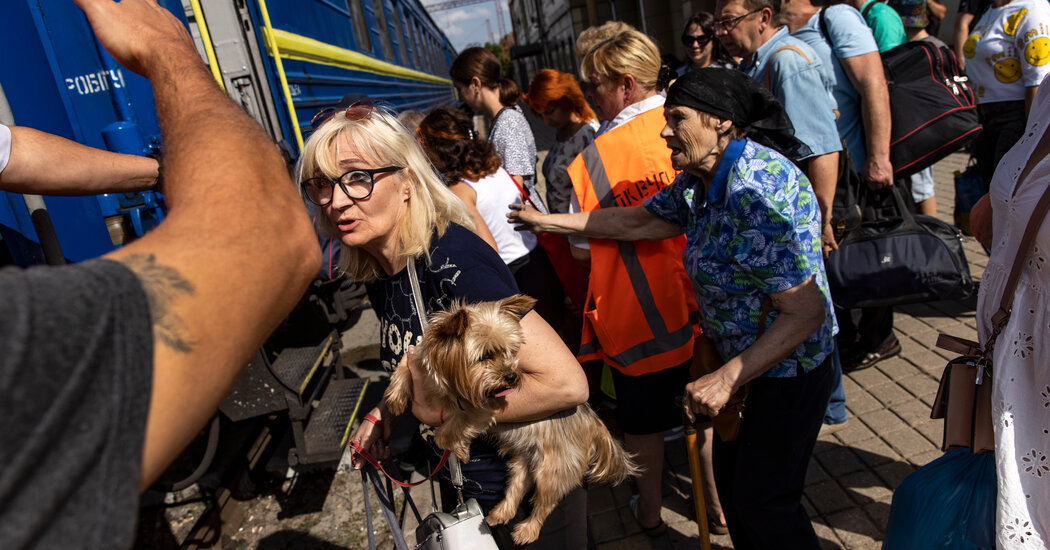 A dispute over license plates between the Balkan nations of Kosovo and Serbia, from whom Kosovo split 14 years ago, yielded protests and gunfire Sunday night, prompting fears that the violence could escalate as Western countries are focused on the war in Ukraine.

Amid demonstrators who built barricades, unknown gunmen fired on Kosovo police officers along the restive northern border with Serbia on the eve of a new law requiring ethnic Serbs living in Kosovo to switch from Serbian license plates to Kosovar ones in the next two months. Many Serbs in Kosovo still use Serbian-issued plates, which the government considers illegal.

Kosovo’s government had also said that beginning Monday, all Serbian ID and passports holders must obtain an extra document to enter Kosovo, just as Kosovars must do to enter to Serbia.

No one was injured by the gunfire, but in response to the violence, the Kosovo police closed two northern border crossings.

“The following hours, days and weeks may be challenging and problematic,” Kosovo’s prime minister, Albin Kurti, said in a video released on his social media channels.

Similar protests over license plates flared a year ago, but observers say that tensions are higher this time because of the Russian invasion of Ukraine, which consumes the focus of Kosovo’s most important ally, the United States, as well as that of the European Union.

Kosovo declared independence from Serbia in 2008, nine years after a 78-day NATO bombing campaign pushed out Serb forces from the former province. Serbia — as well as its key allies, Russia and China — still refuses to recognize Kosovo’s independence, and insists on protecting its ethnic Serb kin, who make up about 5 percent of Kosovo’s population of 1.8 million people.

A little less than half of Kosovo’s Serb population lives in four northern municipalities bordering Serbia and many have been reluctant to recognize the authorities in Kosovo’s capital, Pristina, preferring to live as though they were still part of Serbia.

The European Union has mediated negotiations between both governments since 2011 and slowly, the police, courts and municipalities have come under Pristina’s control. But, encouraged by the political leadership in Belgrade, Serbia’s capital, Serbian nationalists protest each additional attempt at integration.

“We will pray for peace and seek peace, but there will be no surrender and Serbia will win,” President Aleksandar Vucic of Serbia said on Sunday at a news conference. “If they dare to persecute and mistreat and kill Serbs, Serbia will win,” he continued, adding later, “We’ve never been in a more difficult, complicated situation than today.”

Mr. Vucic, who convened a high-level meeting of security and military officials on Sunday night, said that the Kosovar government was trying to cast him in the same light as President Vladimir V. Putin by blaming the unrest on Serbia’s close relationship with Russia, a fellow Slavic and Orthodox Christian nation.

Kosovo’s leader, Mr. Vucic said during Sunday’s news conference, was trying to take advantage of the global mood by projecting that “big Putin gave orders to little Putin, so the new Zelensky, in the form of Albin Kurti, will be a savior and fight against the great Serbian hegemony.”

Vladimir Djukanovic, a Serbian member of Parliament from Mr. Vucic’s ruling party, also linked the border spat to the war in Ukraine, tweeting, “Seems to me that Serbia will be forced to begin the denazification of the Balkans,” an ominous reference to Russia’s justification for the invasion of Ukraine.

Serbia, a candidate to join the European Union, has maintained close ties with Moscow and has not joined Western sanctions on Russia, though it did vote in favor of a United Nations resolution condemning the Russian invasion of Ukraine. Belgrade and Moscow share animosity for the NATO military alliance because of its bombing of Yugoslavia in 1999, when Mr. Vucic was a spokesman for the Serbian strongman Slobodan Milosevic.

NATO still maintains a peacekeeping presence in Kosovo, with a force of approximately 3,700 troops. In a news release, NATO said its force on the ground was “ready to intervene if stability is jeopardized.”

After a meeting with the U.S. ambassador on Sunday night, Kosovo’s government announced it would delay the implementation of both the license plate and identification decisions by one month.

“We call on Pristina and the United States and the European Union backing it to stop provocation and observe the Serbs’ rights in Kosovo,” said Maria Zakharova, spokeswoman for the Russian Foreign Ministry.

Kosovo’s northern border with Serbia has been a hub of violence in the past. In 2011, when the Kosovo police sought to take full control of area, one Kosovo police officer was killed and 25 more were injured.

ROSWELL, Ga.--(BUSINESS WIRE)--Berkshire Hathaway HomeServices Georgia Properties, one of the largest and most successful real estate organizations in … END_OF_DOCUMENT_TOKEN_TO_BE_REPLACED

The real estate market seems to have a split personality.On the positive side for homebuyers, the number of properties for sale shot up by a … END_OF_DOCUMENT_TOKEN_TO_BE_REPLACED

Kim Tae-Ri plays a gun-toting time traveler in 'Alienoid.' Well Go USA Director Choi Dong-hoon likes a challenge. That much is apparent in his latest … END_OF_DOCUMENT_TOKEN_TO_BE_REPLACED